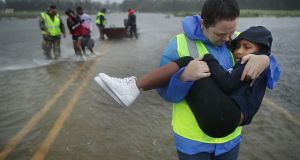 After days waiting for Hurricane Florence to reach the east coast of the United States, the strongest hurricane of the year made landfall on Friday, bringing devastation in its midst.

Thousands of people have been forced to take refuge at special evacuation shelters across the region as wind and rain batter the coast this weekend.

But it is not just those on the east coast that are preoccupied by the hurricane.

Here in the US, the entire country is riveted by storm-watch. Wall-to-wall coverage is running on the Weather Channel. The virtually round-the-clock coverage of Donald Trump’s presidency on cable news channels has been eclipsed by minute-to-minute updates from the worst-hit areas.

Since Thursday the president has been ensconced in the White House. Though the storm’s trajectory is focused south of DC, the US capital is braced for flooding. The president was forced to cancel a “Make America Great Again” rally in Missouri on Friday. Instead, his aides tell us, he was monitoring the encroaching storm from the White House.

There’s nothing like a crisis to bring out the leadership qualities of a president – or not, as George W Bush learned to his detriment. His belated, half-hearted response to Hurricane Katrina and decision not to visit the area for several days severely impacted his ratings, a hit from which he never recovered.

Trump has appeared to relish the drama of the hurricane, regularly tweeting warnings to the populace to “Be Safe!” illustrated with satellite shots of the approaching storm.

On Thursday he stoked widespread outrage by claiming that the official death toll of almost 3,000 provided by federal authorities from Hurricane Maria in Puerto Rico last year had been inflated by Democrats “in order to make me look as bad as possible”.

As the president insists on playing politics with a life-threatening disaster unfolding on America’s shores, the arrival of Hurricane Florence raises more worrying questions about state politics and the increasingly entrenched view on climate change that has taken hold within the Republican Party.

In particular, focus has turned to a law passed by the state legislature in North Carolina, a state that is now being pummelled by Florence. In 2010, the state’s own Coastal Resources Commission issued a report warning that sea levels could rise by a metre over the following century. The response of the state legislature, which had recently passed into Republican hands, was breathtakingly bold – ignore it.

In 2012 the state passed a law effectively ordering local authorities to ignore the scientific warnings when devising coastal policy. The law – which was widely ridiculed at the time – was adopted to prevent “a negative impact on coastal economies” and, its critics suspected, to protect business interests and property values. The outcome was a huge increase in development on North Carolina’s delicate low-lying outer shore.

As officials prepare to count the damage from Hurricane Florence, lessons from Hurricane Harvey last year loom large. A little over a year after the category four hurricane dumped trillions of gallons of water on Houston, many in the city are still struggling.

Houston, which is one of the fastest-growing cities in the US, was a victim of vast over-development. The city has virtually non-existent zoning laws and very few building restrictions, which meant that the sprawling metropolis was highly vulnerable when Harvey hit. Most of those whose homes were flooded had no flood insurance, and were forced to apply to the federal government for help.

Though the rate of urban expansion has not been nearly as intense in the Carolinas, there are some worrying trends.

According to the Wall Street Journal, fewer homeowners in north and south Carolina have flood insurance than five years ago despite the increase in development in the area. This could spell financial trouble for thousands of people – and the federal government. Without flood insurance, many residents – as was the case in Houston – will be eligible to apply for federal disaster assistance in the form of grants and loans.

Whether the latest hurricane to hit the US sparks some serious consideration about urban planning and the realities of climate change remains to be seen. After all, the president previously called climate change a “hoax” and has rolled back many of the climate change initiatives of the Obama administration.

In the medium term, the recurring spectre of life-threatening natural events is likely to be seen as a price worth paying for the low regulation, pro-development and climate-sceptic policy stance that now seems prevalent in the Republican Party.