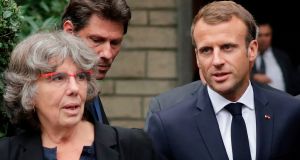 When President Emmanuel Macron recognised the responsibility of the French state for the torture and murder of the communist mathematician and anti-colonialist activist Maurice Audin, he knew it would provoke an outcry from the right and far right.

As Macron noted in a five-page statement on Thursday, the scars of the 1954-1962 Algerian war have not fully healed. It was both a war of decolonisation and a civil war, which claimed the lives of 30,000 French soldiers and hundreds of thousands of Algerians.

“Emmanuel Macron has just opened wide the cupboard of wounds and secrets of the Algerian war . . . The Audin affair was to anti-colonialism what the Dreyfus affair was to anti-Semitism,” wrote Edwy Plenel, the director of the investigative website Mediapart.

Audin was a 25-year-old doctoral student teaching at the University of Algiers. He was also campaigning for Algerian independence in the midst of the Battle of Algiers.

Late on the night of June 11th, 1957, French paratroopers from the first airborne regiment burst into the Algiers apartment that Audin shared with his wife Josette and three infant children. The soldiers grabbed the baby-faced mathematician so quickly that Josette barely saw him disappear down the stairwell. “Take care of the children,” he shouted to her.

Josette was forbidden from using the telephone or leaving the apartment for four days. When Henri Alleg, the director of Alger Républicain newspaper, arrived the next day to warn Audin that the army was rounding up activists, he too was arrested.

Macron “recognises, in the name of the French Republic, that Maurice Audin was tortured then executed or tortured to death by the soldiers who arrested him at his home”, the Élysée’s carefully-worded statement said. Audin’s death was caused by a few, but “was rendered possible by a legally instituted system”, it added. In March 1956, the French parliament had given “special powers” to security forces to do whatever necessary to put down the revolt by Algerian Arabs.

Dr George Hadjadj, who was, like Audin, a member of the Algerian communist party, saw the young mathematician inside the military’s interrogation centre on the heights above Algiers, two hours after Audin was arrested. “He wore underwear and was lying on a plank,” the historian Pierre Vidal-Naquet quoted Hadjadj in L’Affaire Audin. “Pincers linked electrical cables from his right ear and left foot to a generator. They took me to the infirmary, from where I could hear Maurice Audin screaming for a long time.”

When he collapsed at the interrogation centre, Alleg’s tormentors brought a haggard Audin to warn him how much worse it could get. Alleg survived and wrote La Question, the definitive work on French torture in Algeria.

Police told Josette Audin that Maurice escaped. She did not believe them and filed a civil suit for kidnapping and murder, which was dismissed at the end of the war. Several versions of Audin’s death emerged over decades. In 2012, a previously unpublished document written by Col Yves Godard, who was in charge of the Algiers zone, was published by the Nouvel Observateur magazine. It said soldiers confused Audin with Alleg, and that Audin was stabbed by a non-commissioned officer and buried in a ditch outside Algiers.

Shortly before his death, Gen Paul Aussaresses, the intelligence officer for the 1st airborne regiment who was tried in old age for defending torture, told the journalist Jean-Charles Deniau: “We killed Audin. Voilà. Who ordered it? I did.”

Several thousand people, Arabs and Europeans, disappeared without trace in the Algerian war. Macron has ordered that all archives be opened. After Macron hand-delivered his written apology to Josette Audin in her home, the 87-year-old widow and her children said they hope Audin’s remains will be found and given a proper burial.

French commentators called Macron’s move “historic” and compared his recognition of French responsibility for crimes in Algeria with President Jacques Chirac’s admission that France was responsible for handing Jews over to the Nazis. The Association Maurice Audin called on towns across France to name streets and squares after him “so that this system of terror never happens again”.

The conservative newspaper Le Figaro advised Macron to “look to the future”. Brice Hortefeux, a close associate of the former president Nicolas Sarkozy, predictably lamented the attitude of “repentance”.

Marine Le Pen, the far-right politician who lost to Macron in the 2017 presidential race, accused him of “reopening wounds” and dividing the French.

Le Pen’s father Jean-Marie, who was a paratrooper in the Battle of Algiers, dismissed torture as the sort of thing that happens in civil war, and reminded people of the crimes of Arab “terrorists” in the FLN. “I think we should leave the dead buried,” Le Pen said. “It’s not up to the president of the republic to reopen the tomb. It’s hateful and outrageous.”