Hurricane Florence: Mother and baby killed as storm batters US 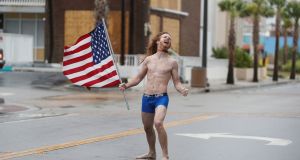 Lane Pittman stands in the wind and rain along Ocean Boulevard during Hurricane Florence in Myrtle Beach, South Carolina, US. Photograph: Randall Hill/Reuters

A mother and infant were killed in Wilmington when a tree fell on their house as Hurricane Florence crashed into North Carolina on Friday, swamping streets with torrential rain and a powerful storm surge.

Police said the two were the first confirmed deaths directly related to storm, while the child’s father had been taken to the hospital.

In Pender County, North Carolina, one woman died after she suffered a heart attack and paramedics were unable to reach her due to blocked roads, authorities said.

After landfall, Florence slowed to a pace that meant it would plague the area with days of flooding, amid both heavy downpours and rising seas.

The hurricane’s storm surge – the wall of water it pushed in from the Atlantic – “overwhelmed” the town of New Bern at the confluence of the Neuse and Trent rivers, North Carolina governor Roy Cooper said.

Mr Cooper said Florence was set to cover almost all of his state in several feet of water.

The centre of the hurricane made landfall on Friday near Wrightsville, North Carolina, bringing with it the life-threatening storm surges and 145km/h winds.

By afternoon winds had dropped to 120km/h and the centre was moving west at 10km/h, the National Hurricane Centre (NHC) said, adding that parts of North and South Carolina would get as much as 1m of rain.

No storm-related deaths or serious injuries were reported in the hours immediately after Florence hit, but authorities said more than 60 people, including many children and pets, had to be evacuated from a hotel in Jacksonville, North Carolina, after strong winds caused parts of the roof to collapse.

The NHC warned there would be “catastrophic” fresh water flooding over a wide area of the Carolinas as a result of the storm.

Authorities in New Bern said there were about 150 people waiting to be rescued from rising floodwaters, and that the downtown area was underwater.

More than 634,000 homes and businesses were without power in North and South Carolina early on Friday, utility officials said. Utility companies said millions were expected to lose power and that restoring it could take weeks.

More than 12,000 were in shelters in the Carolinas.

Officials said some 1.7 million people in the Carolinas and Virginia were warned to evacuate, but it is unclear how many did.

The homes of about 10 million people are under watches or warnings for the hurricane or tropical storm conditions.

As of Friday morning, Atlantic Beach, a town on North Carolina’s Outer Banks barrier islands, had already received 76cm of rain, the US Geological Service said.

A US National Weather Service prediction said that Florence could drop up to eight months’ worth of rain in two or three days.

Mr Cooper has warned of an impending disaster. He said: “The worst of the storm is not yet here but these are early warnings of the days to come.

“Surviving this storm will be a test of endurance, teamwork, common sense and patience.”

Mr Cooper requested additional federal disaster assistance in anticipation of what his office called “historic major damage” across the state.

The storm is expected to move across parts of southeastern North Carolina and eastern South Carolina on Friday and Saturday, then head north over the western Carolinas and central Appalachian mountains early next week, the NHC said. Significant weakening is expected over the weekend.

Forecasters said conditions will deteriorate as the storm makes its way slowly inland.

Its surge could cover all but a sliver of the Carolina coast under as much as 11ft of ocean water, and days of downpours could unload more than 3ft of rain.

Although it was once a Category 4 hurricane with winds of 225km/h, the hurricane was downgraded to a Category 1 on Thursday night.

Forecasters said that given the storm’s size and sluggish track, it could cause enormous damage similar to what the Houston area saw during Hurricane Harvey just over a year ago, with floodwaters swamping homes and businesses.