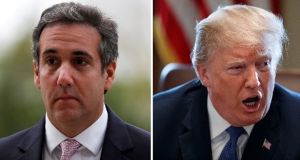 Michael Cohen has been a long-time associate of US president Donald Trump.

The FBI agents who raided the office of President Donald Trump’s personal lawyer on Monday were looking for records about payments to two women who claim they had affairs with Mr Trump, and information related to the publisher of the National Enquirer’s role in silencing one of the women, several people briefed on the investigation said.

The search warrant carried out by the public corruption unit of the New York City federal attorney’s office seeks information about Karen McDougal, an ex-Playboy model who claims she carried on a nearly year-long affair with Mr Trump shortly after the birth of his son in 2006.

Ms McDougal was paid $150,000 (€120,000) by American Media Inc, the Enquirer’s parent company, whose chief executive is a friend of Mr Trump’s. Agents were also searching Michael Cohen’s office for information related to Stephanie Clifford, better known as Stormy Daniels, who says she also had sex with Mr Trump while he was married.

Mr Cohen has acknowledged that he paid Ms Daniels $130,000 as part of a nondisclosure agreement to secure her silence just days before the 2016 presidential election.

Mr Cohen’s lawyer, Stephen Ryan, on Monday called the raids “inappropriate and unnecessary”. In an email on Tuesday, he referred back to that statement.

The early-morning searches enraged Mr Trump, associates said, setting off an angry public tirade on Monday evening that continued in private at the White House as the president fumed about whether he should fire Mr Rosenstein.

The episode has deeply unsettled White House aides, justice department officials and lawmakers from both parties, who believe the president may use it as a pretext to purge the team leading the investigation into Russia meddling in the 2016 election.

Searching a lawyer’s files is among the most sensitive moves federal prosecutors can make as they pursue a criminal investigation. Mr Rosenstein’s personal involvement in the decision signals that the evidence seen by law enforcement officials was significant enough to persuade the justice department’s second-in-command that such an aggressive move was necessary.

Mr Trump’s advisers have spent the last 24 hours trying to convince the president not to make an impulsive decision that could put the president in more legal jeopardy and ignite a controversy that could consume his presidency, several people close to Mr Trump said.

The president began Tuesday morning with a pair of angry tweets, calling the raids “A TOTAL WITCH HUNT!” and venting that “attorney - client privilege is dead!”

Mr Trump has long been mistrustful of Mr Rosenstein, the justice department’s number two official, who appointed special counsel Robert Mueller, and now oversees his investigation into Mr Trump’s campaign and possible obstruction of justice by the president.

In his remarks on Monday night, the president lashed out at Mr Rosenstein for having “signed a FISA warrant”, apparently a reference to the role Mr Rosenstein played in authorising the wiretap of a Trump associate in the Russia inquiry.

Mr Trump considered firing Mr Rosenstein last summer. Instead, he ordered Mr Mueller to be fired, then backed down after the White House counsel refused to carry out the order, the New York Times reported in January. – New York Times