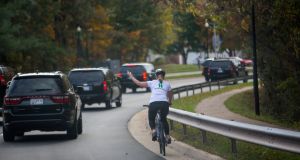 A Virginia woman who lost her job with a government contractor after she was photographed extending her middle finger at US president Donald Trump’s motorcade last year has sued her former employer for wrongful termination.

Juli Briskman directed the gesture toward a string of black SUVs that zoomed by her while she was cycling on October 28th, as Trump’s motorcade was leaving Trump National Golf Club in Sterling, Virginia. Reporters and photographers in a car behind her captured the moment, which quickly spread online and became a source of many jokes on late-night television.

But Ms Briskman’s employer, Akima LLC, did not find it funny. When she returned to work the following week, she said, company executives told her she needed to resign.

Ms Briskman (50) had violated the company’s social media policy on obscenity by sharing an image of the incident on Facebook and Twitter, they told her, according to the lawsuit filed on Wednesday in Fairfax County Circuit Court in Virginia.

The executives also feared blowback from the Trump administration, lawyers for Ms Briskman said in the lawsuit. “Akima’s actions – forcing Juli to resign out of fear of unlawful retaliation by the government – violated the basic tenets of Virginia employment law,” one of them, Maria Simon, said in a statement.

Criticism of our leaders should be encouraged. For a government contractor to fire me for fear of govt. retaliation is an affront to that right & to our democracy @protctdemocracy @GellerLawyers #LongMaySheWave https://t.co/Q3CWhP7KF7

“Ms Briskman chose in her private time and in her capacity as a private citizen to express her disapproval of president Trump by extending her middle finger.”

Her lawyers assert that Ms Briskman’s gesture was “core political speech” protected by Virginia law and the constitution. She is seeking $2,692 (about €2,200) for two weeks of severance she said she was promised but never received, as well as compensation for legal fees.

“Criticism of our leaders should be encouraged,” Ms Briskman, who did not return calls seeking comment, said on Twitter on Thursday. “For a government contractor to fire me for fear of govt retaliation is an affront to that right & to our democracy.”

Akima, which has government contracts in areas that include network operations, cybersecurity and national security, did not immediately respond to a request for comment on Thursday morning.

Virginia is an at-will state, meaning employers can freely fire an employee at any time and for any reason. There are a few exceptions, such as when a termination violates federal discrimination laws.

In an interview in November, Ms Briskman said she had thrown her left hand in the air in a spur-of-the-moment gesture to express her displeasure with Trump. She said she did not know how many people had seen it at the time, other than a Secret Service agent in a vehicle who she believed glanced over at her.

But many people did end up seeing it. After the photo was shared widely online that weekend, Ms Briskman said she posted it on Facebook and Twitter. Neither account identified her as an employee of Akima, where she was a marketing analyst.

She decided it would be a good idea to alert a human resources official at Akima about the photo when she returned to work on the following Monday. She also told her boss that night, when Jimmy Fallon discussed the photo on The Tonight Show.

The next day, according to her lawsuit, company executives called her into a meeting. A vice-president of the company told her that the photo had become a “social media tattoo” on Akima’s reputation, and Ms Briskman was told she was out of a job. – New York Times