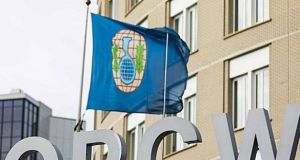 The Hague-based Organisation for the Prohibition of Chemical Weapons said Syria had been asked to make the necessary arrangements for the deployment of an investigation team. Photograph: Bart Maat/EPA

International chemical weapons experts will go to the Syrian town of Douma to investigate an alleged poison gas attack, their organisation said on Tuesday.

The development came as the United States and other western powers consider taking military action over the incident. US president Donald Trump on Monday warned of a quick, forceful response once responsibility for the attack was established. The White House said Mr Trump will not travel on Friday to the Summit of the Americas in Peru so that he can focus on the crisis.

France and Britain were also discussing with the Trump administration how to respond to the incident. Both also stressed that who was to blame still needed to be confirmed.

At least 60 people were killed and more than 1,000 injured in Saturday’s suspected attack on Douma, then still occupied by rebel forces, according to a Syrian relief group. Syria president Bashar al-Assad’s government and Russia, its main ally, said there was no evidence that a gas attack had taken place and the claim was bogus.

But the incident has thrust Syria’s seven-year-old conflict back to the forefront of international concern and pitted Washington and Moscow against each other again.

Aggravating the volatile situation, Iran, Mr Assad’s other main ally, threatened to respond to an air strike on a Syrian military base on Monday that Tehran, Damascus and Moscow have blamed on Israel.

In Syria, thousands of militants and their families arrived in rebel-held parts of the country’s northwest on Tuesday after surrendering Douma to government forces. Their evacuation restores Mr Assad’s control over the entire eastern Ghouta – formerly the biggest rebel bastion near Damascus.

The Hague-based Organisation for the Prohibition of Chemical Weapons (OPCW) said Syria had been asked to make the necessary arrangements for the deployment of an investigation team. “The team is preparing to deploy to Syria shortly,” it said.

The mission will determine if banned munitions were used, but it will not assign blame. Doctors and witnesses have said victims showed symptoms of poisoning, possibly by a nerve agent, and reported the smell of chlorine gas.

Earlier on Tuesday, the Assad government and Russia both urged the OPCW to investigate the allegations of chemical weapons use in Douma – a move apparently aimed at averting any US-led action.

“Syria is keen on co-operating with the OPCW to uncover the truth behind the allegations that some western sides have been advertising to justify their aggressive intentions,” said state news agency SANA, quoting an official foreign ministry source.

OPCW inspectors have, however, been attacked on two previous missions to the sites of chemical weapons attacks in Syria.

Russian deputy foreign minister Mikhail Bogdanov said there was no threat of the situation in Syria resulting in a military clash between Russia and the United States. TASS news agency quoted him as saying he believed common sense would prevail.

On Monday, Mr Trump told a meeting of military leaders and national security advisers in Washington that he would take a decision on a response quickly, and that the United States had “a lot of options militarily” on Syria.

Any potential US strike is likely to involve naval assets, given the risk to aircraft from Russian and Syrian air defence systems. A US Navy guided missile destroyer, the Donald Cook, is in the Mediterranean.

A US official, speaking on condition of anonymity, said a number of other assets could be moved into position “in a short period of time” if needed.

Last year, the United States launched strikes from two Navy destroyers against a Syrian air base.

A European source said, however, that European governments were now waiting for the OPCW to carry out its investigation and for more solid forensic evidence from the attack to emerge. Any plan by the United States and its allies to take military action were likely to be on hold until then, he said.

However, a US strike similar to last year’s would not cause a shift in the direction of the war that has gone Mr Assad’s way since Russia intervened on his side in 2015. Thanks also to Iran’s backing, his military position is currently unassailable.

At the United Nations, the United States had requested the Security Council vote on Tuesday on a proposal for a new inquiry on the use of chemical weapons in Syria, said diplomats. The resolution was likely to be vetoed by Russia.

Moscow told the 15-member council it would put two draft resolutions on Syria to a vote on Tuesday because it does not agree with the US text, said diplomats.

At a meeting on Monday, US ambassador to the United Nations Nikki Haley said Washington would respond to the suspected attack whether the security council acted or not. “This is basically a diplomatic set-up,” said Richard Gowan, a UN expert at the European Council on Foreign Relations.

“Russia will inevitably veto the US resolution criticising Assad, and Washington will use this to justify military strikes,” he said. “A breakdown at the UN will also make it easier for France to justify strikes.”

France said it would respond if it was proven that Mr Assad’s forces carried out the attack. British prime minister Theresa May talked to Mr Trump on Tuesday and they agreed that whoever was responsible should be held to account.

Russian UN ambassador Vassily Nebenzia accused the United States, France and Britain of stoking international tensions by engaging in a “confrontational policy against Russia and Syria”.

“Russia is being unpardonably threatened. The tone with which this is being done has gone beyond the threshold of what is acceptable, even during the cold war,” he said. – Reuters