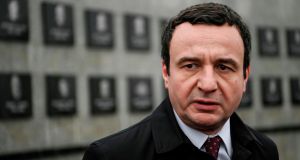 Kosovo’s president Hashim Thaci has nominated long-time opposition firebrand Albin Kurti to be its next prime minister, as domestic and international frustration grows over the country’s political deadlock more than three months after elections.

The repeated failure of coalition talks has prevented the formation of a new government, stymying important reforms and US and EU hopes of re-launching talks between Serbia and its former province Kosovo to finally normalise their relations.

In a rare boost for efforts to forge links between Belgrade and Pristina, however, US diplomats oversaw the signing of a deal on Monday to re-establish direct passenger flights between the two cities after a hiatus of 21 years.

In Pristina, Mr Kurti was nominated as premier and the constitution now grants him 15 days to form a new government and secure parliament’s approval for his cabinet. If he fails, the president will choose another premier, and if that candidate also cannot form a government then snap elections will be triggered.

Mr Kurti’s leftist Vetevendosje (Self-Determination) party won 29 of the 120 seats in parliament in elections on October 6th, just one more than the centre-right Democratic League of Kosovo (LDK), in a result that was seen as a vote for major reform and against parties dominated by veterans of the 1998-9 war with Belgrade.

Disagreement over the division of key posts has poisoned their coalition talks however, causing what Mr Thaci has called a “great disappointment to the people of Kosovo and the risk of a completely unnecessary constitutional crisis”.

Addressing his compatriots in a video message on Monday, Mr Kurti (44) said: “We are obliged before all of you to return to the negotiating table and not leave it until we find a common language and reach an agreement.”

Vjosa Osmani, deputy leader of the LDK, also called for another push to find a compromise deal.

Mostly ethnic Albanian Kosovo broke with Belgrade during a 1998-9 war, and after a period under UN administration it declared independence in 2008.

Serbia refuses to recognise Kosovo’s sovereignty, however, and their relations are still tense and dysfunctional, despite the European Union telling both countries that they must establish normal ties to have any hope of joining the bloc.

At the US embassy in Berlin, however, representatives of Kosovo, Serbia and Lufthansa signed a letter of intent on plans for the German carrier’s budget arm, Eurowings, to start flying between Belgrade and Pristina. It is not clear when the flights could start.

Mr Thaci called it “an important step for the movement of citizens and normalisation process”, while Richard Grenell, the US ambassador to Germany and a White House special envoy to the Kosovo-Serbia talks, said US president Donald Trump had “once again led us to a historic victory”.