The mystery around Napoleon Bonaparte’s father

Paris Letter: The emperor’s father may have been a Breton general despite Corsican claims 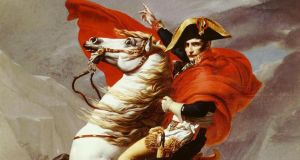 Napoleon Bonaparte left a trail of death and destruction across Europe, yet in France his name remains synonymous with glory. More than a million people visit his tomb at Les Invalides each year.

Ajaccio, where Napoleon may have been born on the Feast of the Assumption in 1769, celebrated the 250th anniversary of his birth for three days last August. Preparations are now under way for the bicentennial of his death on May 5th, 1821.

I write “may have been born” because Napoleon himself questioned the circumstances of his birth. A tenacious rumour has it that his father was Breton, not Corsican, and that he first saw the light of day not in the Casa Buonaparte but in a bleak manor in the Finistère department of Brittany in 1771.

No one is suggesting that the emperor’s remains be exhumed from the six nested caskets within his chocolate-coloured marble tomb, though a DNA test might solve the mystery forever.

Officially, the great Frenchman was the son of Carlo Buonaparte, a lawyer, and Letizia, reputed to be one of the most beautiful women on the Mediterranean island.

But Carlo, a spendthrift and a womaniser, was often absent. Letizia is believed to have sought consolation with Gen Louis Charles René, Comte de Marbeuf, the French military governor of the island, who was 38 years her senior.

“Madame Bonaparte was the object of insistent attention, one might say adoration, on the part of Monsieur de Marbeuf,” the count’s intendant, Victor Colchen, wrote in his memoirs. “He was hopelessly in love.”

In his 2012 book Napoleon or Destiny, the academician Jean-Marie Rouart recounts that Napoleon became obsessed with the question of his paternity during the 1798-1801 Egyptian campaign. He sought the assistance of the mathematician Gaspard Monge and the chemist Claude-Louis Berthollet, two of the scientists who travelled with him, in calculating the date of his conception.

Monge described the exchange in his memoirs, writing that “On the evening Napoleon brought up the thorny question of his birth, he alluded to the known liaison of his mother with Monsieur de Marbeuf . . . and to the protection he gave to her children. He said he wanted certainty regarding his true father. He treated it as a scientific question. He compared the dates of the governor’s stay and his birth, and concluded that he was his son.”

The theory of Marbeuf’s paternity is strengthened by the fact that he ensured Napoleon and his older brother Joseph were enrolled at fine military academies on the continent.

Needless to say, Bretons are more likely to believe tales of Napoleon’s Breton parentage than Corsicans, whose sense of identity is permeated with the emperor’s Corsican blood.

According to the Breton legend, the Comte de Marbeuf spirited Letizia away to the family manor at Penarvern, where Napoleon was born in 1771. He was allegedly baptised in the nearby church at Sainte-Sève.

That might explain why Napoleon was not baptised in Ajaccio until July 1771, instead of in 1769. Infant mortality was high then, and babies were usually baptised within days of birth.

The story took hold back in the 1850s, with the help of Comtesse Elvire de Cerny, a novelist. Local nobles were said to have sworn they’d seen Letizia’s name in the church registry at Sainte-Sève. The imperial police allegedly came to tear out pages of the registry during the reign of Napoleon’s nephew, Napoleon III. That evidence is tenuous, however, since there are no missing pages – and no mention of Letizia – in departmental archives.

Some proponents of the theory claim Napoleon’s name means Na Pol Leon, or “born in Saint-Pol-de-Leon” the Breton town and seat of the diocese, 20km from the manor at Sainte-Sève.

But that evidence seems discredited by the fact that Napoleon was given the name of an older brother who died on the day of his birth in 1765. Letizia bore 13 children. Only eight survived until adulthood. Most were given royal titles by the emperor.

Some sceptics, including the historian David Chanteranne, who organised the commemoration of Napoleon’s 250th birthday, believe Marbeuf was the father not of Napoleon but of his younger brother Louis, born in 1778.

“In the days of the Empire, people said Louis was different from his brothers, both physically and in character,” Chanteranne told Ouest France newspaper.

Louis was the father of Louis Napoleon, who reigned as Napoleon III from 1852 until 1870. DNA tests on the remains of Napoleon III have shown he had no Bonaparte blood.