Donald Trump impeached for second time by US House of Representatives

US president Donald Trump has been impeached for a historic second time by the US House of Representatives. Video: Reuters 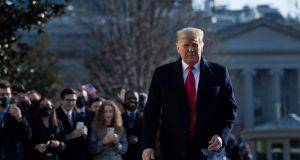 US president Donald Trump walks by supporters outside the White House on January 12th before his departure to Alamo, Texas. Photo by Brendan Smialowski/AFP via Getty

US president Donald Trump made history on Wednesday, becoming the country’s first to be impeached twice.

Just a year after his impeachment for encouraging interference in the US election, the House of Representatives impeached him for a second time – this time for inciting last week’s insurrection in the US Capitol.

Speaking on the House floor ahead of the vote, House speaker Nancy Pelosi said that Mr Trump was a “clear and present danger to the nation”.

“The president of the United States incited this insurrection, this armed rebellion against our common country,” she said. “He must go.”

Exactly a week after a Trump-supporting mob invaded the Capitol, the 435-member body came together to debate and vote on impeachment, as anger at last week’s attack showed no sign of abating.

Thousands of armed military personnel patrolled the building in the wake of last week’s security lapse and ahead of next week’s presidential inauguration.

The House voted to impeach Mr Trump for “high crimes and misdemeanours” based on one article of impeachment – incitement of an insurrection.

Mr Trump responded to his second impeachment by calling on Americans to unite and avoid further violence.

“I unequivocally condemn the violence that we saw last week,” Mr Trump said in a video statement released by the White House on Wednesday evening. “Mob violence goes against everything I believe in and everything our movement stands for. No true supporter of mine could ever endorse political violence.”

He added that he’d been briefed by the US Secret Service about “potential threats” in Washington and across the country. His statement did not directly respond to the impeachment vote.

“Whether you are on the right or on the left, a Democrat or a Republican, there is never a justification for violence. No excuses, no exceptions. America is a nation of laws. Those who engaged in the attacks last week will be brought to justice.”

Huge military presence here in the #USCapitol - thousands of personnel inside the building ahead of #impeachment vote pic.twitter.com/yAj5ojh6RH

He also criticized major technology firms for, as he put it, suppressing free speech. Major social media companies have responded to last week’s violence in part by freezing Mr Trump’s own accounts, while purging others linked to conspiracy theories and threats.

In contrast to Mr Trump’s first impeachment, which was opposed by every Republican member of the House, 10 Republicans joined Democrats in voting to impeach the president.

This included Liz Cheney, the third-ranking Republican. Speaking ahead of the vote she defended her decision as a matter of conscience, rejecting calls from some Republicans for her to resign her chairmanship of the House Republican conference.

Though the vast majority of the 211 Republicans in the House did not vote to impeach the president on Wednesday, many broke with Mr Trump for the first time.

Kevin McCarthy, the highest-ranking Republican and de facto leader of the party in the 435-chamber, declared: “The president bears responsibility for Wednesday’s attack on Congress by mob rioters. He should have immediately denounced the mob when he saw what was unfolding.”

But he stopped short of voting for impeachment, arguing that it would “further divide this nation . . . and further fan the flames of partisan division”.

With less than seven days remaining in Mr Trump’s presidency, focus now turns to the Senate where the impeachment trial will take place. Top Senate Republican Mitch McConnell, who has become increasingly critical of Mr Trump in recent days, indicated that a trial will begin after Joe Biden’s inauguration on January 20th.

However, it is not yet clear if Mr McConnell will vote to convict Mr Trump during the trial, a move that could encourage a core of Republican senators to break with the president.

Mr Trump, who has been banned from Twitter since Friday, issued a statement through the White House while the debate was ongoing. “In light of reports of more demonstrations, I urge that there must be NO violence, NO lawbreaking and NO vandalism of any kind,” he said. “That is not what I stand for, and it is not what America stands for. I call on ALL Americans to help ease tensions and calm tempers. Thank You.”

It comes amid reports that AirBnB is cancelling reservations in Washington DC next week over concerns that protesters could descend on the city to coincide with the presidential inauguration.

Throughout the day, Democrats took to the floor to urge members to impeach the president.

“There are more troops right now in Washington DC than in Afghanistan-and they are here to defend us against the commander-in-chief . . . and his mob,” said representative Seth Moulton, referring to the heavily police presence around the Capitol.

Maryland congressman Jamie Raskin, who lost his 25-year-old son to suicide two weeks ago but has been leading the impeachment push since last week, outlined the very real danger posed by the rioters last week. “They may have been hunting for [Mike] Pence or Pelosi to stage their coup . . . But every single one of us in this room could have been killed,” he said.

Texas congressman Joaquin Castro, who as one of the impeachment managers chosen by Ms Pelosi will play a key role in the Senate trial, was furious. “Donald Trump is the most dangerous man to ever occupy the Oval Office,” he declared.

Republicans, led by Trump ally Jim Jordan, who was awarded the presidential medal of freedom by the president on Monday, set out the case against impeachment.

Others conceded that Mr Trump’s behaviour was unacceptable even as they said they would not vote to impeach him.

Texas representative Chip Roy typified this approach, stating that the president had “committed an impeachable offence”, but asserting that the impeachment process was “flawed”.

Despite the vast majority of Republicans opposing impeachment, the final vote ensures that Mr Trump, with less than a week left in his presidency, will have the dubious distinction of being impeached twice. – Additional reporting by Bloomberg