House speaker Nancy Pelosi called on vice-president Mike Pence to invoke the 25th amendment to the constitution, which allows for a president to be removed. If not, she warned, they could start impeachment proceedings again. Video: Reuters 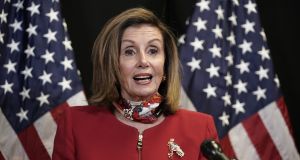 Calls for President Donald Trump’s removal from office intensified on Thursday, as the fall-out from Wednesday’s attack by his supporters on the US Capitol reverberated across a shaken country.

House speaker Nancy Pelosi called on vice-president Mike Pence to invoke the 25th amendment to the constitution, which allows for a president to be removed from office. If not, the House of Representatives could bring impeachment proceedings against Mr Trump for a second time, she warned.

“We have 13 days of Donald Trump to deal with, who is a danger to our country,” she said at a press conference on Capitol Hill.

“What’s next? What happens today? Who knows. What we do know is that he must be contained.”

She joined a growing chorus of voices across the Democratic party urging Mr Trump’s removal – a move that would have to be instigated by the vice-president and the cabinet.

Several Trump allies resigned from administration positions on Thursday, including transportation secretary Elaine Chao, wife of Senate majority leader Mitch McConnell, and former White House chief of staff Mick Mulvaney, who resigned as Northern Ireland envoy. Most of those defecting were due to lose their positions in the coming weeks as Joe Biden assumes the presidency.

The incoming president’s victory was affirmed in the early hours of Thursday morning after members of Congress resumed the certification process in the Capitol, hours after the building was stormed by Trump-supporting rioters.

Mr Trump’s press secretary Kayleigh McEnany said on Thursday that the entire White House condemned the violence at the Capitol on Wednesday, and said those who broke the law should be prosecuted.

“We condemn it – the president and this administration – in the strongest possible terms,” Ms McEnany told reporters in the White House briefing room. “It is unacceptable, and those that broke the law should be prosecuted to the fullest extent of the law.”

She declined to take questions.

“Those who are working in this building are working to ensure an orderly transition of power. Now it is time for America to unite,” she said.

Speaking in Delaware where he introduced his new pick for attorney general, Merrick Garland, Mr Biden excoriated Mr Trump for unleashing an “all-out assault on the institutions of our democracy” and using language “that has long been used by autocrats and dictators all over the world to hold on to power”.

He branded those who attacked the Capitol as “rioters”, “insurrectionists” and “domestic terrorists”.

Mr Trump remained at the White House during the day, having issued a statement overnight committing to an orderly transfer of power, but continuing to reject the election result. The statement was disseminated by an aide, after Twitter banned the president from its platform temporarily. Facebook announced that Trump would be banned from the social networking site “at least” until the end of his presidency.

Meanwhile, the chief of the Capitol police was facing calls from Ms Pelosi and others to resign after Wednesday’s massive security failure. He defended his officers’ conduct during the riot as “heroic”. - Additional reporting by Reuters