Leading Republicans to join Democrats in voting to impeach Trump

As several Republicans have expressed support for the Democrats in voting to impeach President Donald Trump he has called the impeachment proposals a hoax and a vicious hunt. Video: Reuters 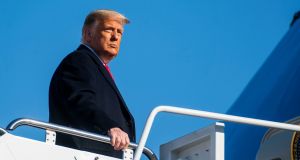 Several Republicans, including senior Congress member Liz Cheney, will join Democrats in voting to impeach President Donald Trump on Wednesday over his role in allegedly inciting the violence that led to the storming of the US Capitol last week.

Mr Trump is likely to become the first US president to be impeached twice.

Ms Cheney, the Wyoming congresswoman and third-ranking Republican in the House of Representatives, said that Mr Trump had “encouraged an angry mob to storm the US Capitol and stop the counting of votes”.

“There has never been a greater betrayal by a president of the United States of his office and his oath to the constitution,” she said in a statement. “I will vote to impeach the president.”

It comes as vice-president Mike Pence informed House speaker Nancy Pelosi on Tuesday night in a letter that he would not invoke the 25th amendment of the constitution, which allows the vice-president and a majority of cabinet members to remove a president.

“I urge you and every member of Congress to avoid actions that would further divide and inflame the passions of the moment,” he said, accusing Democrats of playing “political games”. “I do not believe that such a course of action is in the best interest of our nation or consistent with our constitution.

“Last week, I did not yield to pressure to exert power beyond my constitutional authority to determine the outcome of the election, and I will not now yield to efforts in the House of Representatives to play political games at a time so serious in the life of our nation.”

Mr Pence’s refusal to countenance the 25th amendment came as the House of Representatives voted on Tuesday night in favour of a resolution calling on him to invoke the amendment. The vote fell broadly along party lines.

By ruling out the 25th amendment, the vice-president paved the way for the House of Representatives to proceed with impeachment on Wednesday.

The single article of impeachment charges Mr Trump with “inciting violence against the government of the United States”.

With Democrats controlling the House, it is widely expected that Mr Trump will be impeached. More than a dozen Republicans – none of whom voted to impeach Mr Trump during his first impeachment trial – are expected to vote with Democrats, amid outrage about the events of last week .

It is unclear what may await Mr Trump when the impeachment process moves to the Senate, although leading Republican Mitch McConnell is reportedly furious with Mr Trump over his role in inciting last week’s riots, and could vote to convict him.

On Tuesday, Mr Trump refused to take responsibility for last week’s attack, claiming his incendiary speech near the White House was “totally appropriate”. In his first public appearance since the riots as he left for a visit to Texas, Mr Trump was asked by reporters if he played any role in inciting the violence.

“People thought that what I said was totally appropriate,” he said of his speech. Mr Trump also accused Democrats of continuing the “witch-hunt” against him.

“It’s really a continuation of the greatest witch hunt in the history of politics,” he said. “This impeachment is causing tremendous anger … it’s really a terrible thing that they’re doing.

Later, during a speech to celebrate the building of a section of the border wall with Mexico, Mr Trump said: “Now is the time for our nation to heal. It’s time for peace and for calm. Respect for law enforcement . . . is the foundation for the MAGA agenda,” a reference to his Make America Great Again slogan.

Reading from a teleprompter after he had signed a Donald Trump plaque on the border wall, he said: “A mob stormed the Capitol and trashed the halls of government. As I have consistently said throughout my administration, we believe in respecting America’s history and traditions, not tearing them down.”

Mr Trump was accompanied on Air Force One to the event by senator Lindsey Graham, who said last week that he was breaking with Mr Trump over his refusal to accept the election results.

The president during his speech also claimed that the 25th amendment – the clause in the constitution that allows a vice-president and cabinet to remove a president – was a “zero risk” to him, but would “come back to haunt [president-elect] Joe Biden”.

“As the expression goes, be careful what you wish for.”

“What Trump did today, blaming others for what he caused, is a pathological technique used by dictators,” he said.

Meanwhile, the FBI and department of justice defended their actions in the run-up to last week’s riot in the Capitol, stating that they had passed on information regarding a possible attack to law enforcement partners including the Capitol police force.

It comes as the Washington Post reported that the FBI issued an internal warning that extremists were preparing to travel to Washington to commit violence and “war”, the day before the attack on the Capitol.

At a press conference on Tuesday, acting US attorney for Washington DC, Michael Sherman, said that two pipe bombs that had been placed at the Republican National Committee and Democratic National Committee offices in Washington were “real devices”, comprising explosive igniters and timers.

A $50,000 award for information is being offered by the FBI for any information related to the bombs. The FBI has warned that “armed protests” have been planned at all 50 state capitols and in Washington DC ahead of next week’s presidential inauguration.

Meanwhile, US secretary of state Mike Pompeo cancelled a planned trip to Europe on Tuesday amid reports that senior officials from the European Union and Luxembourg declined to meet him.