Enough Republicans could be tempted to convict Trump 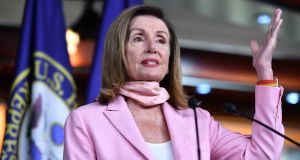 House speaker Nancy Pelosi has made no secret of her views since last Wednesday’s events. File photograph: Getty Images

Just a year after Donald Trump became the third US president in history to be impeached, he is about to make history once more.

The outgoing president is likely to add to his ignoble legacy the dubious distinction of being the first president in history to be impeached twice.

Six days after the Capitol Hill riots, the anger at what unfolded in the symbolic heart of American democracy has not dissipated. If anything, it has intensified.

New footage emerged in recent days showing an appalling level of violence inside and outside the Capitol as police officers battled rioters. The arrest of a man who was photographed holding hand-ties used by police to handcuff people during mass riots has underscored fears that some of those present intended to take members of Congress hostage.

As the fallout from the dire security response to the episode continues – the chief of the Capitol Police force gave an interview to the Washington Post in which he laid some of the blame on security officials in the House of Representatives and Senate – focus has turned to the immediate political response.

With just over a week left in Donald Trump’s presidency, Washington is facing the second impeachment of a president in just over a year.

House speaker Nancy Pelosi, whose own office was desecrated during the violence, has made no secret of her views since last Wednesday’s events.

“Sadly, the person that’s running the executive branch is a deranged, unhinged, dangerous president of the United States, and we’re only a number of days until we can be protected from him,” she said in a 60 Minutes interview that aired on Sunday. “But he has done something so serious [there] should be prosecution against him.”

She has made clear that she believes the best – and quickest – way to remove Trump is through the 25th amendment, which must be invoked by the vice-president and a majority of cabinet members. Vice-president Mike Pence has until Tuesday morning to invoke the constitutional clause, or impeachment will begin.

That remains unlikely, pushing impeachment as the only real way to censure Trump, and also allowing Democrats to prove that they tried all other avenues before they moved to impeach him.

Democratic members of Congress are united behind the impeachment push, though less so on the timing. Throughout Capitol Hill there is a sense that the legislative branch must act and fulfil its oath – if a president can incite a riot at the Capitol and not be impeached, what precedent does that set for future wayward presidents?

Focus is now turning to how the process will work in the Senate, with some Democrats pushing for the trial to be delayed to allow president-elect Joe Biden to implement some parts of his agenda and secure Senate approval for key cabinet appointments.

But it is worth noting that the process in the House will itself be very different to previous modern impeachments. The House held a lengthy impeachment inquiry comprising of hearings and debates that lasted months before members finally voted to impeach Trump over his dealings with Ukraine in December 2018, but this time it aims to fast-track the process.

Conservative columnist Hugh Hewitt says this is unwise, arguing that there is no conclusive evidence that Trump intended the storming of the Capitol and that this timetable would set the precedent of a “rushed impeachment” without regard for due process, which could protect other presidents in the future.

Nonetheless, it appears certain that the House will vote to impeach Trump this week, perhaps with some votes from Republicans.

The real action will be in the Senate, however. In both the Bill Clinton and first Trump impeachments, the Senate did not vote to convict the presidents after they were impeached by the House. Could things be different this time?

Although Trump is likely to be out of office when the Senate trial takes place, a clause in the constitution specifically gives senators the option of voting to bar the impeached president from running from office again – a penalty that has been applied to impeached judges in the past. Although just a simple majority is required for this vote, two-thirds of senators need to first vote to convict the president on the article of impeachment.

This would require 17 Republican senators to vote with Democrats. Could this happen? Possibly. Although only one Republican voted a year ago to convict Trump – Utah senator Mitt Romney, on only one of the two articles of impeachment – more are likely to join him this time. This includes senators whose commitment to Trump has always been lukewarm, such as Susan Collins of Maine and Lisa Murkowski of Alaska.

Significantly, top Republican Mitch McConnell broke with Trump just before last week’s vote to approve the election results, and urged his colleagues to accept Biden’s rightful victory. He could lead a cohort of Republicans prepared to convict Trump.

Others, such as Ted Cruz and Josh Hawley, who challenged the election results last week in deference to Trump, may also be persuaded to vote against their erstwhile friend once he is out of office if it removes his chance of running in 2024, easing their own path to the Republican nomination.

However the Republican vote falls, Biden is facing the real prospect of a lengthy Senate trial in the first months of his presidency, even if it is delayed, though Democrats’ control of the Senate following their victories in Georgia last week ensures that they will determine the rules. Incoming majority leader Chuck Schumer even suggested on Monday night that the process should start before the inauguration, though this appears unlikely.

In the meantime, Trump will be hoping to convince as many of his acolytes to stick with him as possible as the sun sets on his presidency. On Monday, the president awarded the presidential medal of freedom – the highest civilian honour in the land – to congressman Jim Jordan, one of his most vocal defenders during his first impeachment trial.

Jordan has been one of a coterie of Republicans whose primary response to the riots has been to urge Biden to unify the country, completely sidestepping any question of Trump’s responsibility. Announcing Jordan’s award, Trump specifically referenced his role in confronting “the impeachment witch hunt”.

Jordan, the White House said in its announcement, was “an inspiration to freedom-loving Americans everywhere and has distinguished himself as one of the most consequential members of Congress of his generation”.

Whether a shocked nation agrees, after looking at the anarchy that engulfed the capital city last week, is another question.