Trump loses Twitter, the place he sought to bend reality to his will

Analysis: Banishment likely to enrage volatile president but many say it is long overdue 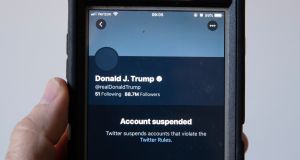 A mobile phone displays the suspended status of the Twitter account of US president Donald J. Trump. Photograph: Michael Reynoldss/EPA

From his first executive tweet on the morning of inauguration day 2017 to his final tweet on Friday, announcing that he would not attend his successor’s inauguration, Donald Trump’s personal Twitter account has served as the president’s official platform.

For four years, the @realDonaldTrump Twitter feed was both public square and personal dialogue, a place where he made policy announcements and taunted political enemies; threatened military reprisal and boasted about his TV ratings.

But it was also, perhaps most dangerously, a place where he sought to bend reality to his will, unleashing a combustible, near-daily stream of misinformation, lies and outrage to his more than 87 million followers.

After he was defeated by Joe Biden, Trump used his account to amplify conspiracy theories and lies about the election result. Twitter began placing warning labels on his claims. But the missives kept coming.

On Wednesday, a mob of rioters loyal to the president stormed the US Capitol in a violent attempt to overturn the results of a presidential election he lost unambiguously. Following the deadly insurrection, Twitter locked Trump’s account for 12 hours and required him to delete a series of tweets it said were in violation of the platform’s policies.

And on Friday, Twitter permanently suspended Trump’s account, citing the “risk of further incitement of violence”, indefinitely muting the president’s megaphone of choice.

His banishment from Twitter is likely to further enrage the president at a moment when even his allies fear what he may do in his final days.The removal is also a symbolic censure of a president whose use of the platform to spread lies and sow discontent helped fuel his unlikely political rise and paved the way for his presidency’s dark end.

With less than two weeks before he leaves office, Trump is facing growing calls for his removal. Trump tepidly appealed for calm, while praising the rioters in multiple tweets, including one in which he said their actions were “the things and events that happen when a sacred landslide election victory is so unceremoniously & viciously stripped away from great patriots who have been badly & unfairly treated for so long”.

Facebook has banned Trump from its platform for at least two weeks, ensuring he would not have access to his account for the rest of his term. Other social networks have also taken action, leaving Trump with fewer and fewer mainstream channels from which to wage his political battles and command the news cycle.

Trump’s use of Twitter posed an unprecedented challenge for journalists and White House staff - a not insignificant number of whom learned of their firing from the president’s Twitter feed. Trump used the platform to undermine factcheckers and shift the media’s attention from one extraordinary provocation to the next, first in 140 characters and later in 280.

What began 12 years agowith the stream-of-conscious musings of a reality TV star became the irrepressible voice of an American president. And there was alway a tweet for that.

Donald Trump Jr, his eldest son, decried the decision and declared free speech dead in America. Arguing that Iran’s supreme leader and other “dictatorial regimes” were allowed to use the service, he wondered why his father would be denied access. “Mao would be proud,” he tweeted.

The Republican senator Lindsey Graham, a longtime defender of the president who broke with Trump after the riots, called the decision a “serious mistake” and also made the comparison to the ayatollah.

But the move was welcomed by Democrats and civil rights groups who have been pushing Twitter for years to take a harder line against the president, who has shared tweets from white nationalists, antisemites and other extremists.

Color of Change, a racial justice organisation that has been pushing tech executives to police Trump’s online behavior more aggressively, launched a petition shortly after chaos erupted on Capitol Hill to remove Trump from Twitter.

“Twitter has been Trump’s largest megaphone - his vehicle to reach the public, spread lies and hate and incite violence,” Rashad Robinson, the group’s president, tweeted after Twitter’s announcement. “This overdue but crucial step couldn’t have happened without the work of grassroots voices, Twitter employees, elected leaders and more.”

Without access to his Twitter account, which has been emptied of his many thousands of tweets, Trump may soon find it more difficult to remain a dominant political force in his post-presidency. In a sign of his reliance on the platform, Trump attempted to keep tweeting on Friday from the @POTUS account and the @TeamTrump account. The tweets were removed almost immediately, and the @TeamTrump account was also suspended.

In a White House statement, written partially in all-caps as Trump was prone to tweet, he was defiant.“I predicted this would happen,” the president said, teasing a “big announcement soon” and “the possibilities of building out our own platform in the near future.”

Even as many celebrate Trump’s removal from Twitter after 1,450 days of outrage, attacks and fearmongering, they also warn that it does little to hobble the online web of lies and misinformation that he amplified from the Oval Office.

Senator Mark Warner, the incoming chair of the Senate intelligence committee, applauded Twitter’s decision as an “overdue step” but said on the platform that the problem of misinformation and extremism online was “much bigger than one person”.

“It’s about an entire ecosystem that allows misinformation and hate to spread and fester unchecked,” he wrote. – Guardian News and Media