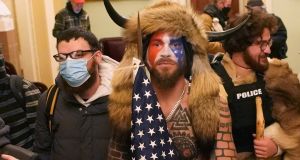 Jake Angeli, centre, a QAnon adherent known as the Q Shaman, with other supporters of President Donald Trump who swarmed the US Capitol on January 6th. Photograph: Erin Schaff/The New York Times

Even by the generous definition of what counts as a Twitter video view, 11 million of them for ITV News’s report from inside the US Capitol building is some achievement.

“For four years we have witnessed turmoil in America, but nothing quite like this,” was the unarguable opening line to Wednesday’s seven-minute piece by ITV Washington correspondent Robert Moore. It went viral as soon as it was posted online, its reach far extending beyond the original News at Ten television audience.

Not only did it capture the sheer combustibility at the heart of Washington DC as it was overrun by a volatile pro-Trump mob, but Moore, Irish camera operator Mark Davey and on-the-ground producer Sophie Alexander were the only broadcast news team to follow the crowd inside the building.

From the detonation of tear gas to the “stop the steal” chanting, the report – or package, as the industry jargon goes – was a visceral trip through an insurrection in progress. There were howls down the lens from men who looked like film extras, only more theatrical. There was the brandishing of speaker Nancy Pelosi’s office nameplate. There were the “this is our house” answers when Moore asked invaders why they had stormed the Capitol.

There were big decisions in the edit: the report briefly includes footage filmed by an anti-abortion activist depicting the aftermath of Ashli Babbitt’s shooting by police as she tried to break into the House chamber. But the report’s strength also lay in the context deftly provided by the seasoned Moore up to his conclusion that “America’s long journey as a stable democracy appears to be in genuine doubt”.

Immediate, and justified, praise was amplified by the admiration of peers from the BBC, CNN and NBC, especially those familiar with the tight turnaround time the ITV team had for meeting the “absolute deadline” of the News at Ten.

Watch @robertmooreitv's report from inside the Capitol building as the extraordinary events unfolded in Washington DChttps://t.co/krCQf1uQbx pic.twitter.com/SiWbzF5Nzs

While the trio have since demurred from the labelling of their journalistic instincts as brave, brave is what they were. On a night when “murder the media” was found scratched on the door of the Capitol, the risk that protesters might not have been satisfied by their effort to distance themselves from the wrong kind of homegrown media – by saying they were from “British television” – was very real.

Other journalists weren’t so fortunate. The Associated Press had equipment stolen and destroyed as its staff was caught up in the rampage. A photographer for the New York Times was thrown to the ground, one of her cameras broken, the other ripped away along with her press pass – leaving her vulnerable to misidentification by police. A Times congressional reporter, among those barricaded inside the House chamber, sent “I love you” texts, others grabbed gas masks. Conflict zone protective gear was the order of the day for a correspondent at CBS News.

It is little wonder that the mother of CNN reporter Donie O’Sullivan, from Kerry, told TG4 that, while she was proud of his calm coverage from outside the Capitol, it was “frightening at the same time, to be watching him” with so much “bad activity” going on. Indeed, “CNN sucks” was one of the mob’s favoured chants.

As has become something of a refrain, the events of the night – including the hostile media climate – were shocking, but they were not surprising. There has been four years of this – more, if you count the tone-setting that took place on the Donald Trump campaign trail throughout 2016. Who can be surprised by anything anymore? Delegitimisation of the “fake”, “corrupt”, “phony”, “nasty” press has been a full-time pursuit for the man, interrupted only by attacks on Democrats and golf. And so last Wednesday night, I settled down to watch a Netflix film, only to be distracted by a grim riot on marble.

In the heat of chaotic spectacles like these, rolling television news channels, from the partisan-by-design ones permitted by US regulators to the European kind striving for impartiality, remain the media vehicle of choice. Twitter is no substitute, as evidenced by the number of users who complained whenever CNN unceremoniously cut to one of their tedious ads. Not now, CNN.

But, of course, it’s not an either-or situation. “Second-screening” has been the norm for so long that to use “second-screening” as a verb feels quaint. The rolling coverage on CNN, BBC or Sky – or even CNBC if you fancied some extra bafflement about the Dow Jones reaching a record high as this was going down – was augmented by breaking-news tweets about where the hell the US National Guard was hanging out and when exactly president-elect Joe Biden would be along, like a reassuring composite of all other non-Trump presidents before him, to recover some dignity for America.

In the days since, it has become apparent through diligent news-gathering that the activities of the Trumpists, once they overwhelmed police and breached the Capitol, were even darker than the first footage of them spilling into the halls like confused day-trippers might have suggested. Attempts to snuff out journalism may have had isolated success, but they have been a collective failure.

The output of professional journalists – including ITV’s seven minutes – has been fed back into the Twitter mix and out again, as various media formats build upon insights generated by others, debunking erroneous claims and rumours as they go.

Still, it feels notable that it was the demands and conventions of an old-school broadcast news bulletin – one with a fixed running time on a mainstream news channel – that delivered some of the most incredible reporting on the day. As Trump knows well, Twitter is a great megaphone, but television confers legitimacy. What a shame for him that one of his favourite outlets for venting has been completely turned off, while the other increasingly looks the other way.