Kremlin critic Alexei Navalny to fly back to Russia on Sunday 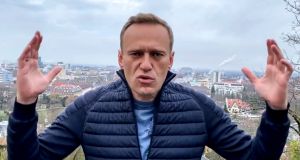 Alexei Navalny, Russia’s most prominent opposition activist, has said he plans to return to his home country this weekend, having recovered from an assassination attempt that he and his supporters say was ordered by the Kremlin.

The return of Mr Navalny, who was airlifted to Germany in a coma in August after being poisoned with the Soviet-developed nerve agent Novichok, comes despite threats from Russian authorities to immediately put him in jail and presents a political dilemma for the Kremlin over how to respond.

The attempted assassination of President Vladimir Putin’s most outspoken critic using a banned chemical weapon sparked international condemnation, prompted the EU to impose sanctions against some Russian officials and drove relations between Moscow and Berlin to a fresh low.

“On Sunday, January 17th, I will return home,” Mr Navalny said in an Instagram post on Wednesday. “I survived. And now Putin, who gave the order for my murder, is screaming all around his bunker and telling his servants to do everything so that I do not return.”

The Kremlin has denied any role in the poisoning, and made various claims that Mr Navalny may have been poisoned after he left Russia, or by the CIA.

Calling on his supporters to meet him on arrival in Moscow, Mr Navalny said a slew of legal moves against him over the past few weeks were efforts by the Kremlin to dissuade him from returning.

Any move to detain the activist could provoke popular protests, while Tatiana Stanovaya, founder of R.Politik, a Russian political think tank, said that the Kremlin’s move to “sharply raise expectations of Mr Navalny’s arrest” meant that if no action was taken “it will be interpreted by conservatives and security officials as a manifestation of weakness”.

“The situation with Navalny is very similar to two trains rushing towards each other and inevitably doomed to collide,” she added in a post on Telegram. “There will be many victims.”

While Moscow has said Mr Navalny is free to return at any time, his announcement comes two days after Russia’s penitentiary service asked for him to be imprisoned, alleging a breach of a suspended sentence for a 2014 conviction that the European Court of Human Rights had ruled was politically motivated.

Separately, Russia announced last month new fraud charges against him that could result in 10 years’ jail, in connection with accusations that he misappropriated Rbs365 million (€4.1 million) from his Anti-Corruption Foundation.

Mr Navalny has alleged the legal threats are a bid to dissuade him from returning, ahead of crucial parliamentary elections in September where his opposition movement is seeking to exploit a fall in popularity for Mr Putin’s ruling party, whose support has sunk to a record low.

The activist was poisoned while on a campaign trip to Siberia ahead of local elections last autumn, and collapsed on a plane back to Moscow that was forced to make an emergency landing. Russian doctors who initially treated him said they found no traces of any nerve agent before he was airlifted to Berlin.

Last month the 44-year-old released a recorded phone call that he said used leaked phone data and travel records to expose a man he claims was a member of Russia’s Federal Security Service (FSB) involved in his poisoning.

While Mr Putin has confirmed that spies have been ordered to tail Mr Navalny, the FSB, the KGB’s successor agency, has dismissed the recording as a fake.

In the Instagram post on Wednesday, Mr Navalny said he had almost fully recovered from the poisoning, and that “the moment I had been waiting for had come”.

“The question ‘to return or not’ never stood before me,” he added. “Mainly because I never left. I ended up in Germany, having arrived in an intensive care box, for one reason: they tried to kill me.” – Copyright The Financial Times Limited 2021