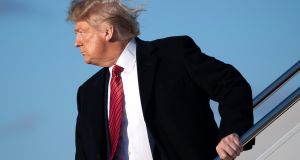 US president Donald Trump boards Air Force One on Friday prior to departing for his Mar-a-lago resort in Florida for the weekend. Photograph: Saul Loeb/AFP via Getty Images.

US president Donald Trump has ignored a plea from his attorney general, William Barr, to not tweet about ongoing legal cases, by using his Twitter account to say he has a “legal right” to do so.

Mr Barr delivered a remarkable public rebuke of the president just hours earlier, saying that Mr Trump’s tweets “make it impossible for me to do my job” and that he would not be “bullied or influenced” over justice department decisions.

His comments came as he faced fierce criticism from Democrats over his intervention in the case of Roger Stone, a longtime confidant of Mr Trump who was convicted in November. Mr Barr this week overruled prosecutors who had recommended that Mr Stone be sentenced to seven to nine years in prison.

The four prosecutors on the case resigned in protest after Mr Barr’s intervention. The move prompted a crisis of credibility for the US justice system, as top lawyers warned it could undermine the integrity of federal prosecutors, politicise the legal handling of Mr Trump’s friends and enemies, and ultimately threaten democracy itself.

However, Mr Trump almost immediately showed that Mr Barr’s attempt to mute the president’s tweets had fallen on deaf ears.

In an early morning tweet, Mr Trump referred to Barr’s assertion that the president had never asked him to do anything related to a criminal case, including Mr Stone’s.

“This doesn’t mean that I do not have, as president, the legal right to do so, I do, but I have so far chosen not to!” he said in the post.

“The President has never asked me to do anything in a criminal case.” A.G. Barr This doesn’t mean that I do not have, as President, the legal right to do so, I do, but I have so far chosen not to!

Mr Stone was convicted in November of tampering with a witness and obstructing the congressional investigation into whether the Trump campaign coordinated with Russia during the 2016 election. He is scheduled to be sentenced next week.

In an interview with ABC News, which aired on Thursday night, Mr Barr said he wanted to lead the justice department without being influenced by outside forces, including the president.

In his interview, Mr Barr emphasised that Mr Trump “has never asked me to do anything in a criminal case”, but he acknowledged the president’s comments undercut his authority.

Mr Barr warned in the high-profile television interview that Mr Trump’s social media interjections “make it impossible for me to do my job”.

The sense of crisis at the justice department continued to build through Friday, as multiple news outlets reported that Mr Barr had appointed an outside prosecutor to look at the criminal case against Mr Trump’s former national security adviser Michael Flynn.

Last month, Mr Flynn asked a judge to allow him to withdraw his guilty plea to charges that he lied to the FBI during the Robert Mueller investigation into Russian election collusion, accusing prosecutors of “bad faith, vindictiveness, and breach of the plea agreement”. Mr Flynn’s petition was denied this week.

According to NBC News, justice department officials have already intervened to help change Mr Flynn’s sentencing recommendations from a six-month sentence to probation.

The justice department also announced Friday that the former acting FBI director Andrew McCabe would not be charged over lying to investigators about a media disclosure.

Mr McCabe, who had approved the investigation into alleged links between the 2015 Trump election campaign and Russia-linked operatives, leading to Mr Mueller’s investigation and report, has long been accused of playing partisan politics by the president, who also repeatedly called for his prosecution.

The president’s fresh assertion of his right to tweet on judicial issues is likely to further complicate the relationship between Mr Barr and Mr Trump, which before the ABC interview had been seen as very close. - Guardian