The Irish Times view on Sanders’s victory in New Hampshire: In search of a bridge builder 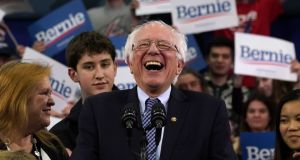 Speaking after he won the New Hampshire Democratic primary, Senator Bernie Sanders decribed his victory as “the beginning of the end for Donald Trump”. With 55 primaries to go, including “Super Tuesday” next month, that is a daring statement. Sanders has fought a vigorous and radical left-wing campaign which gets a boost from this result, but he was held close by two centrist candidates Pete Buttigieg and Amy Klobuchar. Rival left-winger Elizabeth Warren and the mainstream candidate Joe Biden trailed badly in a fragmented and uneven field which so far is an unconvincing threat to Trump.

The Sanders social democratic programme has a remarkable cross-generational appeal. His promises to abolish high university tuition fees, introduce medicare for all and raise stagnant wage levels address central questions facing tens of millions. He wants to transform the country by taking on “the greed of Wall Street, the insurance companies, the drug companies, the fossil fuel industry, the prison industrial complex and the entire 1 per cent”. Research this week from Goldman Sachs confirms the top 1 per cent of US households owns 56 per cent of equities compared with the bottom 90 per cent’s 14 per cent, in a market that has grown tenfold since 1990.

Trump proclaims economic growth at home and putting America first abroad better serve national and popular interests. His appeal to former Democratic voters in left-behind rust-belt states such as Michigan, Wisconsin or Pennsylvania was crucial in the 2016 presidential election and must be countered by the Democrats this time if they are to win. While Sanders can claim an ability to get them back, his party critics say that will fall short nationally because he is too radical for most and does not appeal sufficiently to the coalition of female, black, Hispanic and more prosperous liberal voters needed for a successful Democratic campaign.

These issues will be intensively debated in the coming weeks and months as the Democrats sort out their differences and focus on the most compelling candidates. A big unknown here is how the billionaire businessman Michael Bloomberg will fare when he joins in the Super Tuesday contests. He would bring classical wealth and centrist power to the arguments against Trump; but being cut from the same super-wealthy cloth may prove unacceptable to a party that must convincingly tackle such deep social divisions and inequalities now so characteristic of American life.

US politics is now so polarised, the Republicans so dominated by Trump’s power and media coverage so differentiated between the two different camps that the Democrats have a long and difficult road to travel if they are to find a candidate capable of forging such a winning coalition. That is the democratic function of these primaries. The Democrats have rarely had so much at stake.

1 Harris agrees with PSNI that army council still oversees both Sinn Féin and IRA
2 Drug dealer loses codes for €53.6m bitcoin accounts
3 A Dad with brain cancer: I was given 18 months to live, it put things into perspective
4 MV Alta: The unmanned voyage of the Ballycotton ‘ghost ship’
5 Ben Affleck: ‘It took me a long time to admit that I am an alcoholic’
Real news has value SUBSCRIBE