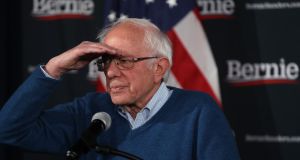 Bernie Sanders: “We are now at a point with some 97 per cent of the precincts reporting where our campaign is winning the popular initial vote by some 6,000 votes.” Photograph: Justin Sullivan/Getty Images

The outcome of the Iowa caucuses was plunged into further uncertainty on Thursday after the Democratic Party’s top official called for a “recanvass” of the results. “Enough is enough,” tweeted Tom Perez, the chairman of the Democratic National Committee. “In light of the problems that have emerged in the implementation of the delegate selection plan and in order to assure public confidence in the results, I am calling on the Iowa Democratic Party to immediately begin a recanvass.”

It was not immediately clear what the impact of his comments would be. According to Democratic Party rules, a recanvass involves auditing the paper records, rather than a full recount of the ballots. The head of the Iowa Democratic Party said that any request for a recanvass must be made by a presidential campaign.

More than 1,700 precincts – including a small number of so-called “satellite” caucus sites – took part in Monday’s Iowa caucus to select the preferred Democratic nominee for president. But technical difficulties with an app used to transmit the results from the caucus sites to the state party’s headquarters in the capital, Des Moines, as well as delays with a back-up phone line, have led to massive delays in reporting. A New York Times report published on Thursday found inconsistencies in the reporting of the results, placing further pressure on the state authorities.

With 97 per cent of votes announced as of Thursday evening, Vermont senator Bernie Sanders had significantly closed the gap with Pete Buttigieg whom he had been trailing in the race.

The latest available results put Mr Buttigieg, the 38 year-old mayor of South Bend, Indiana fractionally ahead with 26.2 per cent of the vote compared to Mr Sanders at 26.1 per cent. Elizabeth Warren was at 18.2 per cent, with former vice president Joe Biden well behind with 15.8 per cent of the vote.

“What I want to do today, three days late, is to thank the people of Iowa for the very strong victory they gave us at the Iowa caucuses on Monday night,” he said. “Even though the vote tabulations have been extremely slow, we are now at a point with some 97 per cent of the precincts reporting where our campaign is winning the popular initial vote by some 6,000 votes.”

Though Mr Sanders has been ahead in first preference votes, Mr Buttigieg is still technically ahead in terms of the “state delegate equivalents” – a calculation used to determine the number of delegates Iowa will send to the Democratic National Convention in July. This is the first time the Iowa Democratic Party has pledged to announce the outcome of the first preference votes as well as the state delegate equivalents – an extra layer of reporting that may have compounded this week’s delays.

Meanwhile, a new poll put Mr Sanders ahead in New Hampshire ahead of Tuesday’s primary contest, with Mr Buttigieg in second place. The Monmouth poll had Mr Sanders at 24 per cent, followed by Mr Buttigieg at 20 per cent.

Mr Biden – who is under pressure to perform well in New Hampshire following his disappointing result in Iowa - was in third place with 17 per cent.