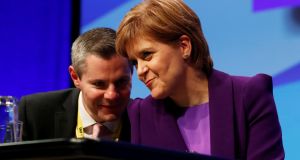 Scotland’s finance minister resigned on Thursday, hours before he was due to present his budget, after reports that he sent hundreds of unsolicited messages to a 16 year-old boy. The Scottish Sun said Derek Mackay (42) messaged the boy over a six-month period, telling him he was “cute” and inviting him to dinner and to a rugby match.

“I take full responsibility for my actions. I have behaved foolishly and I am truly sorry. I apologise unreservedly to the individual involved and his family,” Mr Mackay said in a statement.

“I spoke last night with the first minister and tendered my resignation with immediate effect. Serving in government has been a huge privilege and I am sorry to have let colleagues and supporters down.”

Often tipped as a potential successor to SNP leader Nicola Sturgeon, Mr Mackay has been suspended from the party amid calls from opposition politicians that he should resign from the Scottish parliament altogether.

Police Scotland said it had not received a complaint about the politician’s actions but encouraged anyone with information to come forward. There is no suggestion in the Scottish Sun’s report that Mr Mackay contacted the boy when he was below the age of 16. Under Scottish law, contacting someone under 16 with the intention of engaging in unlawful sexual activity is a criminal offence.

Mr Mackay is reported to have contacted the boy “out of the blue” on Facebook last August and to have sent him at least 270 messages during the subsequent six months. He complimented the boy, who told him he was 16 within weeks of the first message, on his haircut and offered to take him to a rugby match.

In their last conversation, which started at 12.03am on December 27th, Mr Mackay told the boy: “You are looking good with that new haircut.” The boy thanked him and Mr Mackay responded: “Cute. You don’t mind compliments.”

In another message, Mr Mackay said: “To be honest I think you are really cute. Is that OK? Just as long as you know but you can delete that message. Lol.”

The boy’s mother said she first learned about the exchanges last week.

“A man like that is not supposed to say these sort of things to a boy – he looks like he wants something from my son. When I finally read the messages it was terrifying and made my stomach turn. My son’s friends, his girlfriend, can say he is cute – but not this strange man,” she said.

“Derek Mackay has apologised unreservedly for his conduct and recognised, as I do, that it was unacceptable and falls seriously below the standard required of a minister. I can also advise that this morning he has been suspended from both the SNP and our parliamentary group pending further investigation,” she said.