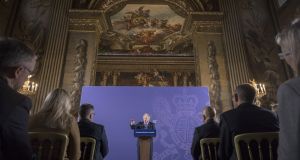 In his speech in Greenwich on Monday outlining Britain’s approach to the next stage of negotiations with the European Union, Boris Johnson made much of the symbolism of the venue, the Painted Hall in the Old Royal Naval College. He encouraged his audience of officials, foreign diplomats and reporters to look upwards at the ceiling James Thornhill spent 20 years painting.

Johnson noted that the painting was completed in 1707, the year of the union with Scotland, and that it exuded national self-confidence.

“Look at these well-fed nymphs and cupids and what have you. They are not just celebrating the triumph of liberty and peace and tyranny – the official title of the scene.

“This is the settlement of a long and divisive political question about who gets to sit on the throne of England. And it is visibly resolved, as you can see, in favour of William and Mary and the result is stability and certainty and optimism and an explosion of global trade propelled by new maritime technology,” he said.

“So this is it. This is the newly forged United Kingdom on the slipway: this is the moment when it all took off.”

Thornhill’s painting is a spectacular example of the Baroque art of the late Stuart era that served to display the power of the British monarchy after its restoration with Charles II. It is the subject of British Baroque: Power and Illusion, an exhibition that opened this week at Tate Britain (until April 19th).

The opening gallery is dominated by Antonio Verrio’s The Sea Triumph of Charles II, which depicts the king as Neptune, ruling the waves from a chariot surrounded by cherubs with the English fleet in the distance. Charles’s queen features among the portraits but so too do his many mistresses, some posing with the children they bore him and one, Louise de Kérouaille, styled as a saucy shepherdess in the countryside.

Writing in the Evening Standard, Tate Britain’s director Alex Farquharson said that when he started planning the exhibition some years ago, he had no idea how topical it would feel.

“Broader questions about the monarchy and parliament feel freshly relevant, just as they did when Charles II was restored to the throne or when William and Mary replaced James II,” he wrote.

“As well as the Restoration, the era also witnessed the union with Scotland and wars that defined Britain’s role on the European stage. It was an age of mercantile expansion and confidence which led to Britain’s global domination and its sense of being exceptional – a feeling that shaped the following centuries and explains many attitudes today.”

One of Johnson’s heroes is Pericles, the general who led Athens during its golden age and launched an extensive building programme that included the Parthenon. He believes in the value of grand projects like those of Pericles as symbols of common identity and he is eager to demonstrate in a visible way the change that Britain’s exit from the European Union will bring.

The problem is that most of the changes have been deferred until the end of 2020, when the transition period ends. Even then, the most important changes are bound up with the uninspiring world of trade negotiations, tariffs, quotas and non-tariff barriers.

One of the galleries in the Tate Britain exhibition is devoted to trompe l’oeil optical illusions, including paintings of flowers that look like real flowers and paintings of furniture that seem like real furniture. The most spectacular is a door from Chatsworth House painted with a hanging violin that looks so real that you want to lift it up.

I remembered that violin on Thursday when international trade secretary Liz Truss published details of what Britain will be looking for in a trade deal with the United States, which it hopes to negotiate in parallel with the EU talks. It wants the deal to be “far-reaching and comprehensive” but only up to a point.