Resolution accuses president of inciting insurrection before storming of US Capitol

Arnold Schwarzenegger has denounced last week's attack on the US Capitol, calling Donald Trump the "worst president ever" and comparing the events to 1938's Kristallnacht, or the Night of Broken Glass, which marked the rise of Nazi Germany. 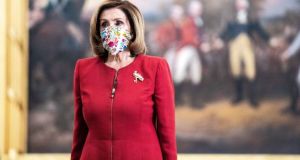 House Democrats have initiated impeachment proceedings against US president Donald Trump, formally introducing an article of impeachment to the House of Representatives.

The resolution accuses Mr Trump of inciting insurrection in his actions ahead of last Wednesday’s storming of the US Capitol.

“Donald John Trump engaged in high crimes and misdemeanours by inciting violence against the government of the United States, ” the article states. It adds that the president “wilfully made statements that, in context, encouraged – and foreseeably resulted in – lawless action at the Capitol”.

In addition, Democrats introduced House resolution 21 calling on vice-president Mike Pence to “convene and mobilise” the cabinet to invoke the 25th amendment to the constitution, which allows for the removal of a sitting president. House majority leader Steny Hoyer introduced the resolution, but Republicans blocked it, setting the ground for a vote on Tuesday morning.

Mr Pence has been given 24 hours to respond to Democrats’ call to invoke the 25th amendment, but if he refuses, the House is expected to vote on the impeachment article in the coming 48 hours.

Given that Democrats control the House, Mr Trump is expected to be impeached, though House speaker Nancy Pelosi could delay sending the article to the Senate until after Joe Biden’s inauguration as president on January 20th.

Should the Senate vote to convict Mr Trump, senators can then hold a vote to bar him from holding office in the future. The prospect of preventing a political comeback for the 45th president could entice some Trump allies with presidential ambitions of their own, such as Ted Cruz and Josh Hawley, to convict.

The possibility of delaying a Senate impeachment trial follows behind-the-scenes discussions between Ms Pelosi and her party over the weekend on how best to proceed. While there has been a groundswell of Democratic support for impeachment, Mr Biden has refused to be drawn on the matter.

Mr Pence remained silent over the weekend. It follows reports that Mr Trump did not phone his deputy while he was caught in the Capitol riots with family members on Wednesday. Some of the rioters chanted “Hang Mike Pence” during the siege.

Meanwhile, Mr Trump, who was banned from Twitter on Friday night, plans to visit Texas to inspect the border wall on Tuesday.

The political develoments come in the wake of arrests across the United States at the weekend as some of those suspected of being responsible for last week’s riot in the US Capitol were charged with federal offences.

In Arizona, a prominent supporter of the Q-Anon conspiracy movement was arrested. Jacob Chansley is widely believed to be the man photographed wearing horns and carrying a spear in the US Capitol on Wednesday.

Adam Johnson (36), who was pictured carrying Ms Pelosi’s lectern, was charged in Florida.

In Alabama, Ronnie Koffman was detained after police found 11 Molotov cocktails, an assault rifle and two pistols in a pick-up truck near the Capitol.

The arrests took place as the FBI appealed for information from the public after Wednesday’s events, which saw supporters of Mr Trump storm the US Capitol in Washington. Police and fire departments in at least four states are investigating claims that off-duty officers may have been involved in the events.

Security has been heightened around the Capitol complex following the attack and ahead of the January 20th inauguration of Mr Biden as president. Social media company Twitter warned on Friday night that plans for future armed protests had “already begun proliferating on and off Twitter, including a proposed secondary attack on the US Capitol and state capitol buildings on January 17th, 2021”.

A procession took place on Sunday along Constitution Avenue for Brian Sicknick, the Capitol Police officer who died from injuries sustained during the incursion. In total, five people died during or in the aftermath of the attack.

While the halls of Congress were empty as members returned to their districts for the weekend, the Capitol physician warned that some members may have been exposed to coronavirus while hiding from rioters.

In an email to members, Dr Brian Monahan said that one person in a room occupied by House members for several hours had tested positive for Covid-19.

As the fallout from the attack on Congress continued, several Republicans called on Mr Trump to resign.

“I think the best way for our country ... is for the president to resign and go away as soon as possible,” said Pennsylvania senator Pat Toomey.

He also accused Republican senators who voted to reject the election results during last week’s joint session of Congress as “complicit” in Mr Trump’s lies.

“They compounded that with this notion that somehow this could all be reversed in the final moments of the congressional proceedings. So that’s .. going to haunt them for a very long time,” he said.

Complaining that she had lost 50,000 Twitter followers, former White House press secretary Sarah Sanders wrote: “The radical left and their big tech allies cannot marginalise, censor, or silence the American people. This is not China, this is United States of America, and we are a free country.”

Many Trump-supporting figures said they were moving to social media site Parler, a favourite of conservatives. But Amazon, Apple and Google all moved to ban the Parler app.