Coronavirus: Cuba to collaborate with Iran on vaccine 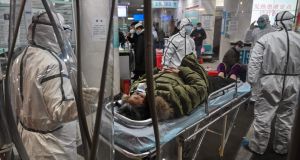 (Medical staff members wearing protective clothing to help stop the spread of a deadly virus which began in the city, arriving with a patient at the Wuhan Red Cross Hospital in Wuhan, in central China’s Hubei province. Photograph Hector Retamal/AFP via Getty Images

Communist-run Cuba said late on Friday it had signed an accord with Iran to transfer the technology for its most advanced coronavirus vaccine candidate and carry out last-stage clinical trials of the shot in the Islamic Republic. The allies are both under fierce US sanctions that exempt medicine yet often put foreign pharmaceutical companies off trading with them and as such they seek to be self-reliant. Both are also strapped for cash.

Cuba’s top epidemiologist said on Saturday irresponsible partying over year-end, often with relatives from abroad, fuelled a surge in coronavirus infections and he warned of a crackdown to prevent the spread of the disease. Authorities in the capital at the same time announced new containment measures including suspension of interprovincial transport, cultural activities and the use of public spaces such as the famous Malecon boulevard during night hours.

Mexico on Saturday reported a record 16,105 new confirmed coronavirus cases, along with 1,135 additional fatalities, according to health ministry data, bringing its total tally to 1,524,036 infections and 133,204 deaths. The new daily death toll marks the fifth consecutive day that officials have reported more than 1,000 fatalities due to the highly contagious disease caused by the virus.

Italy reported 483 coronavirus-related deaths on Saturday, down from 620 the day before, the health ministry said, while the daily tally of new infections rose to 19,978 from 17,533. Some 172,119 swab tests were carried out in the past day, the ministry said, against a previous 140,267.

The UK reported 1,035 new deaths from the virus on Saturday, down from Friday’s record toll of 1,325. It marked the fourth consecutive daily toll – defined as deaths within 28 days of a positive Covid-19 test – of above 1,000.

Australia’s New South Wales (NSW) state recorded three new coronavirus cases on Sunday as a three-week lockdown for about quarter million of people in Sydney’s northern beaches suburbs eased. NSW premier Gladys Berejiklian said masks in public places and on transport will remain mandatory for greater Sydney and some public gathering restrictions will continue as the recent outbreak of the pandemic there still poses risks.

Mainland China reported 69 new Covid-19 cases on January 9th, more than double the 33 reported cases a day earlier, the country’s national health authority said on Sunday. The National Health Commission said in its daily bulletin that 21 of the new cases were imported.

Turkey reported 9,537 new coronavirus cases in the last 24 hours, health ministry data showed on Saturday, bringing the country’s total number of cases to 2,317,118. It reported 181 fatalities due tothe virus over the same period, raising the total death toll to 22,631.