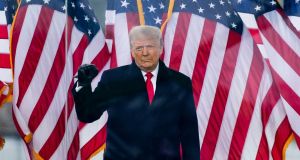 US president Donald Trumphas deployed the social media platform effectively to build his political career since before he announced his run for presidency, amassing more than 80 million twitter followers. Photograph: Michael Reynolds/EPA

The social media giant announced the decision on Friday evening. “After close review of recent Tweets from the @realDonaldTrump account and the context around them – specifically how they are being received and interpreted on and off Twitter – we have permanently suspended the account due to the risk of further incitement of violence,” the company said in a statement.

It continued: “In the context of horrific events this week, we made it clear on Wednesday that additional violations of the Twitter Rules would potentially result in this very course of action.”

Earlier this week Twitter banned the president for 12 hours. Facebook also announced this week that it was removing his account until at least the end of his presidency.

After close review of recent Tweets from the @realDonaldTrump account and the context around them we have permanently suspended the account due to the risk of further incitement of violence.https://t.co/CBpE1I6j8Y

The US president has deployed the social media platform effectively to build his political career since before he announced his run for presidency, amassing more than 80 million followers on Twitter. But he incited the ire of the company this year, which began labelling and removing some of his tweets for violating its rules.

The unprecedented move by the Silicon Valley giant follows this week’s scenes of violence on Capitol Hill. Twitter removed a video posted by Mr Trump in the wake of the protests, in which he repeated claims of election interference and told his supporters attacking the Capitol that he loved them, even as he told them to leave the building.

Among a list of reasons given by Twitter for its decision to ban Mr Trump was information it had gleaned about further attacks.

“Plans for future armed protests have already begun proliferating on and off-Twitter, including a proposed secondary attack on the US Capitol and state capitol buildings on January 17th, 2021.”

Mr Trump’s eldest son, Donald Trump jnr responded on Twitter. “We are living Orwell’s 1984. Free-speech no longer exists in America. It died with big tech and what’s left is only there for a chosen few,” he tweeted. “This is absolute insanity!”

Calls for Mr Trump’s resignation have grown in light of the events which saw a mob breach the capitol building and House Democrats are poised to impeach him for a second time for his role in inciting the Capitol Hill riots.