The Irish Times view on Trump’s final days: Restraining the menace in chief 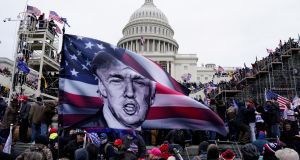 Pro-Trump protesters storm the grounds of the US Capitol, in Washington, DC. Photograph: Will Oliver/EPA

Nine days to go. And, although it has survived four years of the Trump presidency, America is nervously asking itself whether its loose cannon of a commander-in-chief is capable of bringing the roof down in that time. Even close aides are privately describing the president as unhinged, obsessed with his removal’s injustice, lashing out all round, even at formerly loyal vice-president Mike Pence, and bridling at being forced mildly to rebuke the rioters. Contemplating, it is said, pardons all round, heading for the border for a last anti-immigrant polemic, and perhaps even some foreign adventure.

The online space is full of calls, and even plans, for a reprise of the storming of Washington, with protests planned for inauguration day on January 20th. Trump has said he will not attend but has given no indication of his attitude to protests.

This presidency started to the echoes of mobs chanting of Hillary Clinton: “lock her up”. It closes with a groundswell of similar calls about the man himself. In part, it’s about constraining his freedom of action in these final days; in part, it’s about holding him to account politically and criminally for encouraging the quasi-insurrectionary events in the Capitol.

The ultimate constraint is removal, “in case of inability”, under the terms of the 25th Amendment to the constitution. Pence has made it clear, however, he does not intend to initiate it, and so others are looking around desperately at how they can limit the president’s ability to act. There are some reports that even aides are circumventing Trump by not putting issues for decision in front of him. Speaker of the House Nancy Pelosi went as far as seeking assurances from a non-committal head of the military that Trump will not be able to launch a nuclear strike during his last days. Military officials can only refuse to carry out orders they view as illegal.

Perhaps the most significant constraint, however, has been Twitter and Facebook removing the president’s megaphone, his access to the public arena, by closing down his multimillion follower accounts. Trump supporters have railed against an “attack” on his constitutional freedom of speech, but there is no such requirement on private organisations to provide platforms for all.

In terms of holding Trump to account, the House on Monday will open impeachment proceedings for “high crimes and misdemeanours”. But the process, which is not guaranteed success in the Senate – 17 Republicans would need to back it – will certainly take until after he has left office next week. If impeached, however, Trump will earn the distinction of being the first president in history to have been impeached twice, and could lose his right to stand for public office.

Prosecutors looking at charges arising from the Capitol events do not expect Trump to feature. Other courts, however, are just waiting.