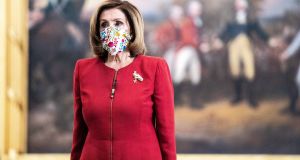 House speaker Nancy Pelosi. A man who had an assault rifle was charged with threatening Pelosi after he travelled to Washington for the pro-Trump rally on Wednesday and sent a text message saying he would put ‘a bullet in her noggin on Live TV’, the federal authorities said. Photograph: Anna Moneymaker/New York Times

US Democrats are preparing to impeach Donald Trump as early as Tuesday, as outrage grows over the president’s role in inciting last week’s riots at the US Capitol.

The Democratic-controlled House of Representatives is certain to have the votes to impeach Mr Trump, making him the first president in history to be impeached twice. However, House leadership is considering delaying the second part of the process – sending the article of impeachment to the Senate for a trial – to allow incoming president Joe Biden time to implement his agenda and instal cabinet members who need Senate approval.

Should the US Senate vote to convict Mr Trump on impeachment charges, senators can then hold a vote to bar him from holding office in the future. The prospect of preventing a political comeback for the 45th president could entice some Trump allies with presidential ambitions of their own, such as Ted Cruz and Josh Hawley, to convict.

The possibility of delaying a Senate impeachment trial follows behind-the-scenes discussions between House speaker Nancy Pelosi and her party over the weekend on how best to proceed. While there has been a groundswell of Democratic support for impeachment, Mr Biden has refused to be drawn on the matter.

Despite facing calls to invoke the 25th amendment, which sets out the process for removing a sitting president, vice-president Mike Pence remained silent over the weekend. It follows reports that Mr Trump did not phone his deputy while he was caught in the Capitol riots with family members on Wednesday. Some of the rioters chanted “hang Mike Pence” during the siege.

Meanwhile, Mr Trump, who was banned from Twitter on Friday night, plans to visit Texas on Tuesday to inspect the Mexican border wall.