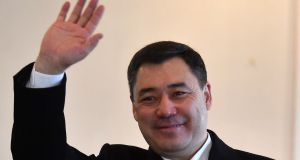 Nationalist prisoner-turned-prime minister Sadyr Japarov has won a landslide victory in Kyrgyzstan’s presidential election, with early results on Sunday suggesting he garnered almost 80 per cent of the vote.

Sprung from his jail cell during violent riots in October against the former president and his government, Mr Japarov was appointed prime minister and then acting president, in the central Asian country’s third toppling of a head of state through popular protest since 2005.

The rapid change of power underlined the political instability and fierce regional rivalries in Kyrgyzstan that has made it the only multi-party democratic state in a region awash with ageing dictators and autocracies. But the political tumult and rise of an outspoken Kyrgyz nationalist has unnerved Russia, which has a military base in the country and is jostling for influence with China in the resource rich, post-Soviet Central Asian region.

Mr Japarov has nonetheless vowed to maintain close ties with Russia, the main destination for hundreds of thousands of Kyrgyz migrant labourers whose remittances are a crucial pillar of the country’s economy.

“Russia is our strategic partner,” he told reporters when casting his vote in a district of the capital, Bishkek on Sunday.

In a further boost to his power that some analysts have warned could undermine the country’s political plurality, a national referendum run alongside the presidential ballot saw 81.3 per cent of voters support proposals to strengthen the role of the presidency at the expense of parliament.

Erica Marat, associate professor at the College of International Security Affairs, a US defence department-backed institution in Washington, described Mr Japarov as a “Kyrgyz Trump” whose election could mark “the beginning of another yo-yo moment of top-down authoritarianism”.

“A presidential system plays one single purpose: boosting Kyrgyz Trump’s powers beyond what the current constitution allows and cementing his central role like [Vladimir] Putin, [Nursultan] Nazarbayev, etc,” she said, referring to the longtime leaders of Russia and Kazakhstan.

Protesters who took to the streets against alleged vote-buying in the country’s October parliamentary election broke into both his jail cell and the office of the president, pitching the country into crisis and leaving his predecessor Sooronbai Jeenbekov with little choice but to step down.

A former member of parliament, Mr Japarov was part way through serving an 11-year sentence for kidnapping, related to his campaign in the early 2010s to nationalise the vast Kumtor gold mine in the country owned by Canada’s Centerra Gold.

Since assuming the acting presidency Mr Japarov has recanted that desire, but said that he thought the profits from the mine should be shared more fairly. – Copyright The Financial Times Limited 2021