US election results: What to expect at Wednesday’s meeting of Congress 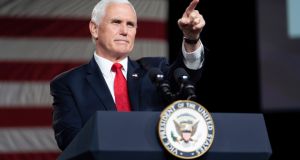 US vice-president Mike Pence is set to preside over a special joint session of Congress to announce officially the next president. Photograph: Nicole Craine/The New York Times

The US Congress meets on Wednesday to count the Electoral College votes reported by each state following November’s presidential election, and to announce officially the next president and vice-president of the United States.

The process to take place on Wednesday is set out in the US constitution and the Electoral Count Act and is the final step in the election result process before the inauguration of the next president on January 20th.

At 1pm local time the two houses of Congress – the House of Representatives and the Senate – will convene in a joint session. In one of the rare moments when the two houses meet together, senators will move across the Rotunda of the US Capitol and join House members in the larger House chamber.

As set out in the constitution, the president of the Senate – a role held by the US vice-president – presides over events.

The certified electoral votes from each state, which were sent to Washington, DC, after the Electoral College met on December 14th, will be presented in a mahogany box. The vice-president distributes the certificates to four tellers – two Democrats and two Republicans.

The tellers will then read out the results. At this point, a member of Congress can object to the result from any state. If it is a written objection, signed by at least one member of each of the House and the Senate, then the joint session splits, senators return to the Senate and both houses debate and vote on the objection in their respective chambers.

This debate is limited to two hours. At the end of the debate and vote, the senators return to the House and inform the presiding officer, who in this case would be Pence, if they have accepted or rejected the objection.

The process of reading the results then continues, but members could feasibly make further objections. Ahead of Wednesday’s gathering, some Republicans have indicated they will challenge the certified results from at least three states – including Arizona, Georgia and Pennsylvania.

The coronavirus pandemic complicates matters. Social distancing rules limit the number of members on the floor at one time, so the process could be prolonged.

Once the final objection has been debated and voted on, the tellers count the electoral votes and the presiding officer announces the result.

While objections are expected at Wednesday’s joint session, ultimately Joe Biden is expected to be declared as the next president of the US and Kamala Harris as the next vice-president, because a sufficient number of Republicans in both chambers have said they will reject the objections.

There has been speculation that Mike Pence may not attend Wednesday’s session, due to pressure from Trump.

In the event that the vice-president is absent, the president pro tempore of the Senate would step in – in this case Iowa Republican senator Chuck Grassley.

Trump tweeted on Tuesday: “The Vice President has the power to reject fraudulently chosen electors.”

Prof Rebecca Green of the cross-partisan National Task Force on Election Crises, however, described the president’s tweet as “completely false”.

“That’s not how the rules work,” she said. “The presiding officer presides over the joint session – he or she sits in the speaker of the House’s chair and has the power to preserve order. The power is not substantive.”