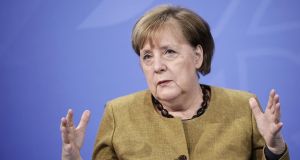 Just days into the new year, the realpolitik of autumn’s federal election in Germany has collided with its Covid-19 response – shattering months of pandemic consensus in chancellor Angela Merkel’s ruling grand coalition.

Growing disquiet over the pace and planning of Germany’s vaccine roll-out has provided the chancellor’s junior coalition partner, the Social Democratic Party (SPD), with what it hopes is a chance to boost its political profile and dismal showing in the polls of just 16 per cent.

Growing divisions hung over Merkel’s video-conference meeting with 16 state leaders on Tuesday, at which they agreed to extend Germany’s lockdown of all non-essential shops and services until at least January 31st.

The SPD heads seven of Germany’s state governments and, in Berlin, has served as junior coalition partner under Merkel for all but four of the 15 years since 2005.

But now, with the energy of a nippy terrier instead of what critics view as a three-term coalition lap dog, the SPD and its candidate to succeed Merkel as chancellor – federal finance minister Olaf Scholz – have demanded answers over Germany’s vaccine roll-out.

In particular they hope to channel disquiet over why the country that is home to pharmaceutical innovator BioNTech is not receiving more doses of its breakthrough vaccine.

In the SPD’s sights: federal health minister Jens Spahn, the 40-year-old seen as a potential chancellor to succeed Merkel.

Scholz, with designs on that job as an SPD chancellor, has sent Spahn a list of 24 questions he would like answered.

A focus of the questions is the decision by Berlin and other capitals to ask the European Commission to conduct contract negotiations with Covid-19 vaccine manufacturers.

A spokesman for Merkel insists this was done to provide coherence and pool the bloc’s purchasing power; SPD regional leaders say the approach has left them without enough vaccine to meet demand locally.

Merkel defended the EU-led approach – and her minister– as the best to ensure a fair distribution of vaccines across the bloc, which in turn was the best for Germany, given its nine land borders.

“We don’t want national solo runs and think the most effective protection for us can be reached with a European approach,” she said.

Spahn has accused the SPD of being disingenuous about the vaccine bottleneck everyone knew was coming in January.

“In a phase like this, it never works to want to be government and opposition simultaneously,” said Spahn on national television. “It hasn’t worked for the SPD in the last 20 years and I don’t believe it will work in an election year either.”

In a bid to regain the political initiative, Spahn has upped his own ambitious vaccination target and told party allies that all Germans will have received an invitation for their first jab by the middle of 2021.

In three-quarters of Germany’s 410 counties and municipalities, the incidence rate is now above 100 per 100,000 of population; some 70 areas have runaway rates above 200, triggering movement restrictions to a 15km radius under new proposals.

While the SPD stepped up its attacks on Mr Spahn, and the CDU moved in to defend him, opposition Green Party leader Robert Habeck accused the ruling coalition of playing political games that “squander trust in vaccines, where trust is the necessary capital”.