One of eight states that voted for House of Representatives, Senate and governorships 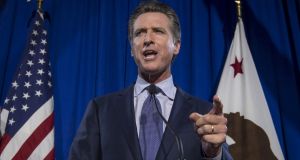 Gavin Newsom, the Democratic former mayor of San Francisco, emerged as the leading contender for the race as the state’s governor. Photograph: David Paul Morris/Bloomberg

Democratic candidates are expected to be on the ballot in all but one California congressional district at the midterm US elections in November, after a night of primaries that was neither the “blue wave” that some in the party had hoped for, nor a complete shutout as others had feared.

The battle in California is crucial to the Democrats’ ambitions to win back control of the House in the midterm elections because of the party’s targeting of at least half a dozen Republican districts that voted for Hillary Clinton in the 2016 presidential race.

The Golden State was one of eight that voted for candidates on Tuesday for the House of Representatives, the US Senate and governorships.

But under the state’s unusual voting system, the top-two vote winners in this week’s all-party primaries go through to the November vote, regardless of their parties.

Because a large number of Democratic candidates ran in some of the state’s congressional seats, the party has been concerned it would fail to qualify for the run-off in those districts as its vote was splintered. That would leave the Republican Party with House seats it could otherwise have lost.

Democratic party committees have scrambled in recent weeks to thin out the number of candidates running in some Californian districts. With the votes still being counted on Wednesday, Democratic candidates appeared to be in first or second place in 52 or 53 districts, although the final vote count could take days to be verified.

In the state’s eighth congressional district, a Democratic candidate was in third place, trailing the Republican runner up by fewer than 1,000 votes.

Meanwhile, Gavin Newsom, the Democratic former mayor of San Francisco, emerged as the leading contender for the race as the state’s governor.

Mr Newsom is the favourite to replace Jerry Brown as California’s governor because of the state’s centre-left leanings, but his Republican rival John Cox performed strongly as well.

“We’re engaged in an epic battle, and it looks like voters will have a real choice this November – between a governor who is going to stand up against Donald Trump and a foot soldier in his war on California,” Mr Newsom told supporters at a victory party on Tuesday night.

The president has found himself at loggerheads with California’s leadership over federal policies on everything from immigration to environmental standards.

Also in California, Senator Dianne Feinstein fended off a primary challenge from the left by a Democratic opponent, Kevin de León. Mr de León came in second place and will face off against Ms Feinstein in November in a Democrat-on-Democrat race.

In New Jersey, Democratic senator Bob Menendez narrowly defeated his own primary challenge from a little-known publisher – a sign of how a 2017 corruption trial dogged his candidacy despite the jury in the case being deadlocked.

President Trump, meanwhile, trumpeted the latest votes as a victory for his party and the White House’s agenda. “Great night for Republicans!” he tweeted on Wednesday. “Congratulations to John Cox on a really big number in California. He can win . . . So much for the big Blue Wave, it may be a big Red Wave. Working hard!”