Top North Korean official heads to US for talks 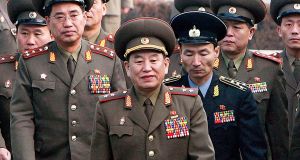 North Korean general Kim Yong-chol, who is travelling to the United States for talks on the planned summit between Donald Trump and Kim Jong-un. Photograph: Jo Yong-hak/AFP/Getty Images

A top North Korean official has travelled to the United States amid continuing signs that a much-anticipated summit between US president Donald Trump and North Korean leader Kim Jong-un may proceed as planned next month.

Kim Yong-chol was due to arrive in New York on a flight from Beijing on Tuesday, becoming the most senior North Korean official to visit the US since general Jo Myong-rok visited then president Bill Clinton in the White House in 2000 for talks that ultimately proved fruitless.

Mr Trump confirmed the visit on Twitter, while the White House said that it was actively preparing for the summit, which had been fixed for Singapore on June 12th.

“We have put a great team together for our talks with North Korea, ” Mr Trump said in a tweet. “Meetings are currently taking place concerning Summit, and more. Kim Young Chol, the Vice Chairman of North Korea, heading now to New York. Solid response to my letter, thank you!” he said, in reference to the letter he sent to Kim Jong-un last Thursday cancelling the summit.

Since then there has been a flurry of diplomatic activity, prompted by North Korea’s conciliatory response to Mr Trump’s letter, in which the leadership said it remained open for talks “any time” and expressed hope that the “Trump formula” could help settle the issue.

Podcast: Can the summit be revived?

Two American delegations have travelled to Asia in recent days to prepare for a possible summit. One, led by Sung Kim, the current US ambassador to the Philippines and former ambassador to South Korea, arrived in the Northern side of the demilitarised zone between North and South Korea at the weekend, where talks are continuing. A second group of US officials have travelled to Singapore where they are putting logistical plans in place for a summit.

The developments came after South Korean president Moon Jae-in and Kim Jong-un held an unscheduled meeting at the border village of Panmunjom on Saturday, with both sides stating that the US-North Korea summit should go ahead.

“I truly believe North Korea has brilliant potential and will be a great economic and financial Nation one day. Kim Jong Un agrees with me on this. It will happen!” Mr Trump tweeted on Saturday.

The visit to New York by Kim Yong-chol is the most significant sign yet that North Korea is preparing for the summit in earnest. A former spy, he was blacklisted by the United States in 2010 and 2016 over the North’s nuclear programme. He was also linked to an attack on a South Korean ship in 2010 that led to the death of 46 sailors.

A close aide to Kim Jong-un, he has been playing an increasingly important role in the improvement of relations between North and South Korea, attending the Winter Olympics in the South in February. He is expected to meet secretary of state Mike Pompeo during his visit to the US.

While both the United States and North Korea are understood to be in favour of the summit going ahead, there are still significant differences between what both sides want from the summit. With North Korea unlikely to sign up to complete denuclearisation, it is unclear if Mr Trump would accept a phased or more limited approach, particularly considering his decision to withdraw from the Iran nuclear agreement in part because of the sunset clauses contained within the agreement. These would see restrictions on Iran’s nuclear enrichment programme lifted after 2025.

The White House confirmed that Japanese prime minister Shinzo Abe will meet Mr Trump on June 7th ahead of the Singapore summit. The two men spoke by phone on Monday. Tokyo is keen to ensure that Japanese concerns are addressed in any agreement signed by Washington and Pyongyang.