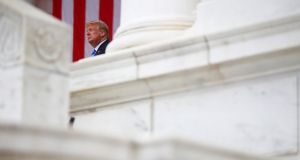 It is arguably the biggest foreign-policy challenge of our time, but it has also become one of the most gripping pieces of political theatre in recent history. In 10 days the first summit between a North Korean leader and a sitting American president may – or may not – take place in Singapore.

The past few weeks have witnessed an extraordinary series of diplomatic interchanges between the two nuclear powers. Having agreed to a summit with a leader he once denounced as “little rocket man”, the US president, Donald Trump, cancelled the meeting abruptly on May 24th after a senior North Korean official described Trump’s vice-president, Mike Pence, as a “political dummy” and threatened nuclear war.

But a conciliatory response from North Korea to the cancellation prompted the Trump administration to reconsider. This week three separate strands of negotiations have been under way in a bid to get the summit back on track.

These were: a visit by an American contingent to the North Korean side of the demilitarised zone on the Korean peninsula; a meeting between North Korean and US officials in Singapore to work through logistical preparations for the summit; and a trip by Kim Jong-un’s close aide Kim Jong-chul to New York and Washington, where he met with Trump and the new US secretary of state, Mike Pompeo.

But while the extraordinary will-they-won’t-they narrative has dominated headlines, the underlying purpose of the preparatory meetings remains extremely serious, and could have profound ramifications for world peace and the Korean peninsula in particular.

A summit with Kim Jong-un is the biggest diplomatic gamble of Trump’s presidency So far, the administration has thrown out the rule book on international diplomacy. Summits between world leaders typically come as the final stage of a long diplomatic process involving months or years of preparatory negotiations between officials, not least to ensure that the meeting delivers results.

In this case Trump agreed to the summit on impulse, when South Korean envoys presented him with an invitation from the North Korean leader at the White House in March. Trump’s decision to meet his one-time foe surprised even some of his closest advisers.

This lack of groundwork was one reason why the summit preparations initially collapsed two weeks ago, as both sides began to discover more about the other’s expectations of the meeting.

This gap between what each side wants remains the key obstacle to a successful summit, says Jonathan D Pollack of the Brookings Institution. “Only 10 days before President Trump’s presumed departure for Singapore, it is stunning how little remains agreed to, even in broad conceptual terms,” he said this week. “The contrasts in the language and expectations of the two leaderships remain glaring, even after two visits by Mike Pompeo to Pyongyang. ”

The issue of denuclearisation is the key sticking point. The gulf between the two sides is wide. Pompeo and Trump’s national-security adviser, John Bolton, have advocated “complete, verifiable and irreversible” disarmament by North Korea. Bolton – who as recently as this January advocated a pre-emptive attack on North Korea – has also indicated that Pyongyang must eliminate its entire nuclear programme before any economic relief is granted to the country.

But analysts believe this is wishful thinking.

“North Korea sounds like the exact opposite of a state preparing to disarm, particularly when you look at Kim’s recent comments to a domestic audience,” says James Acton of the Carnegie Endowment for International Peace. The North Korean leader has spoken recently of his country being reborn as a “world-class nuclear power”.

Acton points out that only one of the 13 “actions” contained in the historic Panmunjom Declaration signed by the North and South Korean leaders following their inter-Korean meeting in April deals with denuclearisation, and its wording is “deliberately vague”.

“While the communique talks of ‘realising, through complete denuclearisation, a nuclear-free Korean peninsula’, this could be taken by North Korean to mean denuclearisation as part of a global disarmament process,” he says.

Donald Trump has indicated that he may be more willing than his advisers to accept some kind of phased denuclearisation. In recent weeks he said that while he wanted an “all-in-one” deal, he recognised that North Korea “may not be able to do exactly that”.

His grip of the details of a proposed agreement is likely to have improved since April, when he appeared to get ahead of the facts by declaring on Twitter that North Korea had “agreed to denuclearisation” at the Panmunjom meeting with South Korea.

In fact North Korea had agreed to close its nuclear test site, not to eliminate its existing nuclear arsenal. Sceptics also point out that North Korea’s commitment to denuclearisation was a feature of previous high-level negotiations with the US during the Clinton and George W Bush years, which ultimately proved fruitless.

What is clear, however, is that Donald Trump wants a meeting to take place, although his reasons may be more self-serving than based on any considered view of whether it represents the best long-term strategy for peace.

The president has talked in hyperbolic terms about the summit being “great for the world” and has appeared pleased at suggestions that he should get the Nobel Peace Prize. But his successor as president will be left with the realpolitik of implementation and ensuring that North Korea complies with the terms of any deal.

Nonetheless, Trump’s surprise manoeuvre to engage with Kim Jong-un is playing well with the American public. A CNN poll last month found that 77 per cent of Americans approve of the decision to meet Kim Jong-un. More generally, 53 per cent of people approve of how he is handling relations with North Korea – up from 43 per cent in March and 35 per cent in November. Overall, the president scored higher on North Korea than on any other issue.

The shift in opinion reflects the fact that, for most people, the prospect of diplomacy and engagement is far preferable to the belligerence of last August and September, when North Korea and the United States seemed to hover close to nuclear war.

Trump is now holding the strongest cards. Once a summit actually occurs – and the inevitable compromises and limitations of any nuclear deal become apparent – support for his position is likely to be tempered.

Nonetheless, Americans might be willing to take that gamble. Compared with previous failed deals with North Korea, the stakes are much higher than during the Clinton or George W Bush years.

North Korea’s nuclear capability has been rapidly expanding, culminating in a nuclear test in September that was so powerful as to move Earth’s crust. As a result, anything that results in de-escalation and makes the immediate threat of nuclear war recede is welcome.

For the moment Americans are willing to give their president the benefit of the doubt. In the meantime the world will wait and see if his remarkable free-wheeling approach to diplomacy will work.