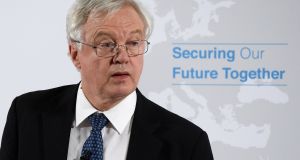 The British government is expected to publish a proposal on Thursday for the backstop to avoid a hard border amid cabinet divisions over whether it should have a time limit. Brexit secretary David Davis said the proposal still had to be signed off by a cabinet subcommittee before it could be presented to EU negotiators in Brussels.

“The detail of this is being discussed at the moment. It has been through one cabinet committee, it is going to another one, and it would be improper of me to pre-empt the negotiation there. But I suspect it will be fairly decisive,” he said.

Mr Davis said the backstop, which would keep Northern Ireland aligned with the EU customs union and parts of the single market after Brexit, would be time-limited.

“I think the prime minister has already made public the fact that we expect to put a time limit on the backstop proposal,” he said.

Earlier, a Downing Street spokesman said that the backstop was necessary to fulfil the commitments the British government made to avoid a hard border in Ireland, although all sides hoped another solution would be found.

“It’s important that that is time-limited, even outside of the fact that we don’t expect or want it to happen,” the spokesman said.

Before the last EU summit in March, Britain and the EU agreed that the backstop should remain in place “unless and until” another solution to keep the Border open is found and Downing Street said on Wednesday that it did not “resile” from any commitments it had made.

The EU has told Britain that talks on their future trade and security relationship cannot proceed unless there is “sufficient progress” on a legally binding withdrawal agreement, which includes the Border backstop, when EU leaders meet at the end of this month. Mr Davis said on Wednesday, however, that the issue of Northern Ireland was unlikely to hold up progress.

“We’re not expecting the Northern Ireland elements of this arrangement until October so I wouldn’t expect any time issue to stop progress between June and October,” he said.

Fine Gael Senator and spokesman on EU affairs Neale Richmond on Wednesday night described this month’s summit as “a vital staging point in the Brexit negotiations” ahead of a meeting in October, when the negotiations are expected to be concluded.

“Given the ever-looming conclusion of the Brexit negotiations, it is maddening that the British government has yet to present any detailed proposals to bring about a legal interpretation of December’s binding, political agreement,” he told a conference in London organised by the centre-right Wilfred Martens Centre. “At this stage, I say enough of the Brexit kite-flying; it is time for real proposals.

“The speeches given by the prime minister up to this point have been warm and made all the right noises, but they have not addressed the key issues in any sort of detail and they have not used the necessary technical language; it’s been all rhetoric.”