Trump confirms North Korean summit is back on

US president Donald Trump has said that his June 12th summit with Kim Jong-un is back on, saying he had received "a very interesting letter" from the North Korean leader before minutes later saying he had not yet opened it. 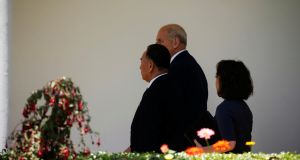 US president Donald Trump has confirmed he will meet North Korean leader Kim Jong-un in Singapore on June 12th, following a breakthrough in talks on Friday.

The decision to go ahead with the summit, which Mr Trump cancelled last week, followed a week of intense diplomacy between the two sides, and paves the way for a first ever meeting between a leader of North Korea and a sitting US president.

The development emerged after a senior North Korean official hand-delivered a letter from Kim Jong-un to Mr Trump at the White House.

Kim Jong-chol, a former spy and close aide to the North Korean leader, travelled by car with a motorcade from New York to Washington on Friday morning, arriving in the US capital shortly before 1pm. He was greeted at the White House by chief-of-staff John Kelly before meeting with Mr Trump and secretary of state Mike Pompeo in the Oval Office.

The visit was the first by a North Korean official to Washington since 2000 during the Clinton presidency.

Speaking after the meeting, Mr Trump said North Korea “wants to do denuclearisation”. However, it was still unclear if the two sides could reconcile differences on the definition and scope of denuclearisation – the key point of contention going into the summit.

Mr Trump said the letter he had received from the North Korean leader was “very interesting”, though he indicated later that he had not read it.

The decision to press ahead with the meeting in Singapore marks the latest twist in a diplomatic drama that has played out over the last few weeks and months. Having pledged to meet any nuclear threat with “fire and fury” last August as North Korea intensified its nuclear activity, Mr Trump then agreed to a summit with his one-time foe Kim Jong-un in March.

Officials from the US and North Korean sides have been meeting in the demilitarised zone between North Korea and South Korea; in Singapore, where logistical preparations for the summit have been in place; and in New York, where Mr Pompeo met with Kim Jong-chol for two days of meetings. Mr Trump’s meeting with the North Korean emissary took place shortly before the president departed for Camp David for the weekend.

Speculation about Melania Trump’s health continued as the White House confirmed that the first lady would not be travelling to Camp David with her husband for the weekend. The president’s daughter Ivank, and other members of the extended family are spending the weekend at the presidential retreat.

Melania Trump has not been seen in public in more than three weeks. Her last public appearance was on May 10th, when she welcomed home three Americans who had been released by North Korea in the early hours of the morning. Four days later she was admitted to hospital for treatment for a benign kidney condition, and was kept in for five days before returning to the White House.

In a tweet this week the first lady addressed the recent speculation about her health. “I see the media is working overtime speculating where I am & what I’m doing. Rest assured, I’m here at the White House w[ith] my family, feeling great, & working hard on behalf of children & the American people.”

Controversy also surrounded a tweet earlier in the day from the president as he appeared to flag positive US job numbers more than an hour before their official announcement, sending stock markets sharply higher.

The unemployment rate fell to 3.8 per cent last month, the Bureau of Labor Statistics announced on Friday, as employers added 223,000 jobs to the payroll. The better-than-expected figures mean that the unemployment rate is now at its lowest since April 2000.

Mr Trump tweeted shortly after 7.20am local time that he was “looking forward” to the job numbers, sparking criticism that he had disclosed market-sensitive information.

However, press secretary Sarah Huckabee Sanders noted that the president had not disclosed the numbers. The White House confirmed that Mr Trump was briefed on the figures by head of the National Economic Council, Larry Kudlow, on Thursday evening.

Mr Trump addressed the job numbers in a speech to the US Coast Guard on Friday morning, hailing a “historic milestone” and “another all-time record low” .

While the job numbers are likely to reflect the impact of the recent Republican tax package, the Democratic National Committee criticised the Trump administration for building an economy “focused on rewarding wealthy corporations at the expense of working families”.