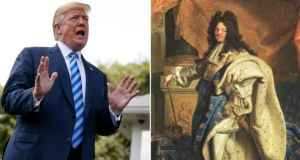 US president Donald Trump, and the Sun King, Louis XIV of France: “Trump and his team have sought to take advantage of the monarchial foundations upon which the office of the presidency was built to claim the kind of legal deference once demanded by Charles I and Louis XIV.” Images: New York Times/Getty

There is a popular bumper sticker in the United States that says “We are a republic, not a democracy”. In truth, America was designed more like a constitutional monarchy than a republic. In recent days Donald Trump’s lawyers have started to exploit this fact by claiming that the American president, like the European monarchs of old, is more or less above the law.

The power held by the American president is extraordinary, especially compared to the leaders of European democracies. All executive authority is vested in the officeholder. The president is commander of the armed forces and can, among other things, issue executive orders that are legally binding on federal agencies, veto laws passed by the legislature, appoint ambassadors and judges and pardon people convicted of a crime.

Louis XVI once exclaimed, when told that a proposal of his was illegal, 'it is legal because I will it so'

Now, in an effort to ward off the potential legal danger arising from the Mueller investigation, Trump’s defenders have sought to reimagine the president not as an elected official answerable to the people, but rather someone beyond the reach of the law. In the last few days, we have seen Trump’s legal team claim that the president can dismiss an investigation even if it explores wrongdoing on his part, is by definition incapable of obstructing justice, and cannot be subpoenaed by a grand jury. Trump has insisted on Twitter that he is free to use a presidential pardon upon himself.

Trump’s struggles are part of a long series of clashes in western politics regarding the extent to which national leaders are sovereign over, or subordinate to, the state they rule. When Charles I was put on trial for treason in 1649 after the English Civil War, he made the rather reasonable defence that he could not be guilty of treason against himself. He denied that anyone in England had the right to put him on trial and reminded the court that “the King can do no wrong”. While even many of his enemies felt the law was on Charles’s side, legal niceties ultimately didn’t save him from the chopping block.

Across the English Channel, Louis XVI once exclaimed, when told that a proposal of his was illegal, “it is legal because I will it so”. But it was his forefather, Louis XIV, who best expressed the monarchial view that a king was not accountable to the public by pithily commenting “l’État, c’est moi” (I am the state). In a letter to Robert Mueller’s office earlier this year, Trump’s lawyers made a very similar-sounding argument, saying that as the president was the “chief law enforcement officer”, he could not commit the crime of obstruction of justice because that would amount to obstruction “of himself”.

The debate about the extent of royal power was also at the heart of the American Revolution. Many people today believe the drive for American independence was created by the emergence of a separate American identity. In fact, the political crisis that led to the Declaration of Independence in 1776 had much more to do with the fact that American colonists believed King George III was ignoring the constitutional limitations on his power.

When the American revolutionaries were victorious, they didn’t so much develop a new way of governing as build an idealised version of what they felt the British government should have been. The possibility of an American monarch had even been debated before the idea of a president was settled upon. While clear constitutional limitations were placed on this position, it is undeniable that the president, through the powers bestowed on the office, was being cast as an improved version of the English king. Many of the American founding fathers, including James Madison, were opposed to this, but the more monarchial vision of the presidency won out in the end.

In this light, the American Revolution looks somewhat conservative compared to what followed in France. The French Revolution, especially after the excesses of Robespierre, set the template for the rest of European democracies to be deeply suspicious of strong executive power being invested in a single individual. Ironically, thanks to the intervention of Charles de Gaulle in 1958, the French president today is the only European leader who arguably has more political authority than his American cosunterpart.

Thus, Trump and his team have sought to take advantage of the monarchial foundations upon which the office of the presidency was built to claim the kind of legal deference once demanded by Charles I and Louis XIV. Whether this position will be tested in court, and whether it will be successful or not, only time will tell.

In the meantime, expect Trump to vigorously claim that supreme political authority ultimately resides with him. Perhaps even a tweet declaring “Le département de la justice, c’est moi” would not be altogether surprising.

1 How one couple’s weekend away resulted in 30 Covid-19 cases
2 Covid-19: College students on a break and middle-aged people in rural pub linked to large clusters
3 Taoiseach tells TD to ‘cop on’ over criticism of contact tracers asking about pubs
4 Netflix: 10 of the best new shows and films to watch in October
5 The Comey Rule review: You actually begin to root for Trump
Real news has value SUBSCRIBE