‘We realised we can’t stop this’: locals flee inferno in Australian village of Wingello

‘We heard this huge noise, like a freight train, then the red sky, all these embers raining down’ 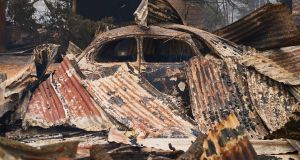 The frame of a Volkswagen Beetle is pictured underneath a burnt out structure in Wingello on Sunday. Photograph: Getty Images

When the sky turned an angry red and the wind roared like a freight train, David Bruggeman knew it was time to flee.

Bruggeman’s place was among the first in Wingello, a sleepy village in the southern highlands region of New South Wales, to meet the fire front that tore in from bushland to the south on Saturday night.

He and other residents thought they would only face ember attacks from the distant Currowan fire, burning on the opposite side of the Shoalhaven River.

They were instead confronted by an inferno.

What firefighters had feared for days had come to pass. Once the fire jumped the river, it grabbed hold in the dramatic and dense bushland of Moreton national park.

It lit up forests to Wingello’s south, creating a new bushfire that tore northwards, out-of-control, flamed by strong winds.

“When the southerly hit, that’s when things really got interesting. It formed pyro clouds. One had formed earlier in the day, but it formed three,” Peter Lockerby, the Rural Fire Service head of the Bundanoon Wingecarribee district, said.

“That means only one thing - the fires are moving quickly and burning profusely.

“It took a run of about 12km in two hours, which is just ridiculous. We have seen it before this season, up north, but we never thought for a second we’d experience it down here.”

The fire split into two flanks, one to the north hitting Bundanoon and Exeter, and a southern point smashing Wingello, roaring through the state forest with “amazing speed”, catching forestry firefighters in an overrun which they were able to escape from.

“One moment it was darkness, and then it was dark red,” Lockerby said.

“We heard this huge noise, like a freight train, then the red sky, all these embers raining down ... that’s when we realised ‘we can’t stop this’ and retreated,” he told the Guardian.

Bruggeman fled to the general store he has owned and run for 11 years, a building that also serves as Wingello’s post office.

Within 20 minutes, the flames caught up. The fire approached the store’s backyard.

He piled seven of his kids, his mother and father-in-law, and two friends into a van, and the family again fled, this time leaving town entirely for the relative safety of the Mittagong RSL, where they stayed during the horrors of last night.

Around him, Bruggeman watched an apocalyptic scene. Homes were in flames all around him.

“We watched all these fires breaking out all across Wingello,” he told the Guardian.

“We got the chance to escape, out by the main road, and we looked behind us and thought ‘we’ve lost everything’. We were actually quite happy just to be alive.”

Wingello has known fires before. The town’s name is said to derive from an Indigenous language term meaning to “to burn”. Bushfires destroyed houses and killed residents in 1965, and threatened the town again in 1998.

On his way out of town, Bruggeman took a picture of the inferno he was leaving behind and posted it to Facebook.

“Unless there is some stupendous miracle that defies any reason, we have lost the house and the shop. We fully expect to return to ashes where the house and shop now stand.”

The morning brought with it extraordinary news. His son went into town and reported back that both the store and the home had somehow survived.

Scott Maddox, who helps run Wilmotte cottage, a small bed and breakfast in the picturesque village, had left nothing to chance, making sure he was out of the area well in advance. He said information from the town had been limited, but said he’d been assured his place was safe. “Our place is still standing,” he told the Guardian.

Many people in Wingello, Bundanoon and Penrose had left much earlier to avoid any risk of being trapped by the fire, and on Sunday the highlands villages were like ghost towns. Smoke hung heavy on the road, obscuring any columns which might indicate a blaze was nearing.

But the weather and the quiet were incongruous to the massing of trucks and firefighters at Wingello station.

On the corner of the next block a property was laid waste, a smoking reminder of what could come again. Among the charred rubble and cars, blackened vines wrapped around a still standing chimney.

At what seemed to be the former front entrance, some bricks were still blonde and statues stayed upright. The red number 75 shone from the blue column next to stairs that now go nowhere.

North of tiny Wingello and even tinier Penrose, Klaus Elber was staying on Sunday to defend as the fire continued to burn. It was just him and the bushland property he’s spent so many years building and perfecting.

He’s a former RFS volunteer, and had cleared as much as he can.

If that’s not enough, he’s built a bunker. There’s a few around, but his is pretty rudimentary. The old diesel tank buried under two feet of dirt, with a sealable air vent and stairs leading down to the door. It’s not pretty, it’s not comfortable, but come a fire front, it’s liveable, he says.

“It’s better than a wombat hole,” he said.