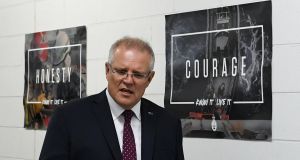 Australian prime minister Scott Morrison was lambasted and mocked on social media for politicising a beefed up defence-force response to the nation’s catastrophic wildfires.

Many praised the unprecedented scale-up of army, naval and aircraft services, while others labelled images of the prime minister talking to firefighters as “shameless” advertising.

Key authorities in New South Wales and Victoria – the states hardest hit in the months-long inferno that has killed 23 people – welcomed the news of the deployment of as many as 3,000 army reservists, but voiced disappointment that they weren’t consulted ahead of the decision or briefed before Mr Morrison detailed his response plans to the media.

“The video message simply communicates the government’s policy decisions and the actions the government is undertaking to the public,” Mr Morrison said in a Twitter post late Saturday amid a flurry of comments, including from Kevin Rudd, a former Labour party leader who served as prime minister twice from December 2007 to to September 2013.

The criticism adds to a backlash against Mr Morrison, 51, for his clumsy handling of the wildfires – highlighted by his curtailed trip to Hawaii just days after declaring a national disaster – and tepid acknowledgment of the role of climate change in fueling them.

The prime minister was heckled on Thursday by angry residents when he visited the bushfire-ravaged town of Cobargo, where two people died earlier this week, while others declined to shake his hand and called for more resources to tackle the disaster.

New South Wales Rural Fire Service Commissioner Shane Fitzsimmons said he found out about the additional military aid through the media, causing him to spend time understanding how the measures would be integrated while his crews battled a dozen fire emergencies across the state.

“I was disappointed and I was frustrated on one of our busiest days,” he told reporters Sunday in Sydney.

Fitzsimmons said he has since received an apology from the prime minister’s office. Victoria’s Emergency Management Commissioner Andrew Crisp also said he had received no official notification before the announcement.

Meantime, cooler weather and light rain moving across southeastern Australia has brought some relief from one of the country’s worst days in the crisis, which has raged since September.

The Insurance Council of Australia said Sunday 5,850 claims have been received so far, estimating losses at A$375 million (€233 million).