Waiting for a coronavirus test in Dublin: ‘My chest is raw. My lungs ache’

Odhrán Allen is 47, a lifelong asthma sufferer who ‘ticks the box for every symptom’ 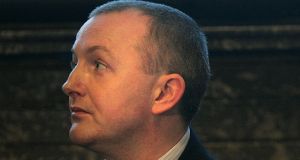 “My chest feels raw. There’s an ache in my lungs. I have a temperature. I’m ticking the box for every coronavirus symptom on the list,” says Odhrán Allen*, who is 47 and a lifelong asthma sufferer.

Since GPs began referring people for coronavirus testing at the beginning of this week, the HSE has reported a huge surge in people waiting for a test. It has ramped up testing capacity, but has warned that the backlog could take time some time to work through.

Allen, who lives in Dublin, is one of those waiting. “I’m assuming it’s a nasty infection, but I’m aware it could be Covid-19,” he says, over the phone.

So far, around 7,000 people have been tested. Speaking on RTÉ Radio on Thursday, Health Minister Simon Harris said the HSE would soon begin testing 15,000 people a day, but it was “impossible to predict” exactly when this would happen.

While he waits for his test, Allen describes his symptoms: “I have a sinus-type headache. I feel tired, a sleepy kind of tiredness, but my mind is quite active. I just want to sit here on the bed. I normally like having the heating on, but it’s off and the moment, and I’m sitting with the window open and I’m too hot.”

He checks his temperature during our conversation: having dropped with medication the previous day, it is back up at 39 degrees. Although his asthma is generally well managed, he suffers from frequent chest infections and is aware that he’s in a high-risk group.

He was most recently diagnosed with a chest infection in late February, and went on a course of antibiotics. By Friday March 6th, he had fully recovered. “My chest was clear, and I was completely well, and my lungs were as good as they ever are.”

But nine days later, he began having symptoms of what he at first assumed was a recurrence of the chest infection. “I was coughing a lot. It wasn’t a dry cough. I had discomfort in my chest, but I wasn’t floored by it; I was able to keep going.”

His appetite disappeared on Sunday, and by Monday, he had a temperature that spiked at 40 degrees. This was a red flag – he rarely gets a fever with a chest infection. “When I had that spike in my temperature, that’s when I started to think this could be coronavirus. I knew I was at no higher risk of getting it [than anyone else], but I was acutely aware from the first news reports that if I get this I could be extremely ill.”

On Tuesday March 17th, with his GP service closed for St Patrick’s Day, Allen called the out-of-hours GP service and described his symptoms. At that stage, it was felt the most likely diagnosis was another chest infection, so a visit was arranged for the doctor on call. Six hours later, when the GP still hadn’t turned up, Allen called back, and was told it could be the early hours of Wednesday morning. He cancelled the visit.

The following morning, he had a telephone consultation with his own GP. “She said it could be a recurrence of the infection, but she wanted to refer me for testing for Covid-19.”

“She said I’d get a follow up text from the HSE, but I’ve had no contact from anyone at all yet. It’s been well over 24 hours now, and I’m just waiting. I’ve had nothing directly from the HSE yet. I understand that they’re under severe pressure, but while I know there’s a backlog I think they should at least contact those referred to let them know it was received, and when they estimate the test will be done.”

Speaking on Thursday, the Minister for Health Simon Harris said 39,000 more testing kits were due to arrive in Ireland that day. Separately, Dr Colm Henry said there were “pinch points” in the system, but that anyone with symptoms of Covid-19 should self-isolate, pending testing.

Odhrán and his partner been fully self-isolating and working from home for his protection since March 11th, so he doesn’t have any concerns about infecting others.

While he waits for his test, his condition continues to worsen. “I’ve been on antibiotics since yesterday, but my chest feels sorer today. Sometimes I have a chest infection and I barely need to take a day off work. This feels much worse. It is starting to remind me of when I last had pneumonia. But I’m calm. I’m not panicked,” he says.

“When it first occurred to me it might be Covid-19, I was extremely anxious. I’ve thought all along that the best treatment for me is not to get this virus because it could kill me. And now I’m waiting for a test, I feel completely calm. I’ve got to do the best I can to focus on recovering.

“It could start to feel very apocalyptic if you go into yourself and focus on the fact that you’re feeling sick and waiting for results.”

* Odhrán Allen originally asked to remain anonymous, and The Irish Times agreed to use the pseudonym Mark. The article was edited later on Friday March 20th, when Allen decided to go on the record.

Updated: Friday, March 20th, 3.55pm
On Friday afternoon, five days after his symptoms began, Odhrán Allen is still waiting to hear from the HSE, and is feeling steadily worse.

“I’ve now been waiting two days to be tested for Covid-19, but I have still heard nothing from the HSE. My GP can’t give me steroids to help with breathlessness until she knows if I have the virus, as they would suppress my immune system,” he says.

He is worried that the system already appears to be overwhelmed. “The testing seems to be too slow, and with the delays in testing I don’t see how proper contact tracing can be carried out ... The message that there are a few pressure points is a big understatement,” Allen believes.

“I have a friend who is waiting since Monday morning to be tested and has also heard nothing from the HSE yet. Communication needs to improve, and testing has to happen much faster.”

Keep our money if you must, Ryanair. We’d rather lose our airfares than board our flight
4

I started the ‘gender reveal’ party trend, and I regret it
7

What is it like to be a Jehovah’s Witness family living in Ireland?
Real news has value SUBSCRIBE