Kosovo's government in crisis over US pressure and coronavirus 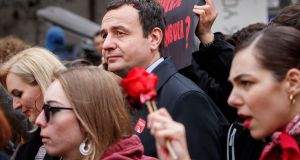 The prime minister of the Republic of Kosovo Albin Kurti takes part in a march to mark International Women’s Day in Pristina. Photograph: Valdrin Xhemaj/EPA

Kosovo’s six-week-old coalition government is on the brink of collapse due to a row over the coronavirus outbreak and US demands for an immediate end to tough trade measures against Serbia that have frozen talks between Belgrade and Pristina.

The crisis erupted when Kosovo prime minister Albin Kurti sacked interior minister Agim Veliu on Wednesday for backing a call by the country’s president, Hashim Thaci, for a state of emergency to be imposed due the spread of the virus, which is known to have infected 20 people in the mostly ethnic Albanian state.

Mr Veliu’s party, the Democratic League of Kosovo (LDK), responded by threatening to dissolve its ruling coalition with Mr Kurti’s Vetevendosje (Self-Determination) party and call a no-confidence vote against the government.

“Today there was an unexpected and unannounced action by the prime minister – the dismissal of an LDK minister, contrary to our agreement,” LDK leader Isa Mustafa said.

He acknowledged, however, that the key issue was Mr Kurti’s refusal to bow to a US demand to fully revoke a 100 per cent tax on Serbian imports.

“Our main disagreement is the worsening relations with our partner, the US,” Mr Mustafa said. “We don’t see any perspective for the future of this country without the presence and support of the United States. ”

The White House has sharply increased its engagement with Kosovo-Serbia issues in recent months, in what analysts believe could be a push by US president Donald Trump to broker a historic deal between the Balkan neighbours during his bid for re-election this year.

Serbia rejects the independence of its former province, where it fought with ethnic Albanian rebels in 1998-99, and with Russia’s help it is blocking Kosovo from global organisations and lobbying other states not to recognise its sovereignty.

In response, Kosovo’s previous government imposed the punitive tariffs on Serbian imports in November 2018, prompting Belgrade to call a halt to EU-brokered talks to normalise their relations until the taxes were lifted.

Richard Grenell, Mr Trump’s envoy to the Belgrade-Pristina dialogue, has rejected Mr Kurti’s proposal to remove the tariffs gradually in exchange for Serbian concessions, and said this month that “the US would not waste our assistance if Kosovo’s leadership kept harming its people this way.”

When Georgia senator David Perdue then said that the US may have to “reconsider” its military presence in Kosovo, the president’s son Donald Trump jnr tweeted: “Agree. There are 650 US troops in Kosovo. Time to bring them home.”

Mr Thaci strongly backs the US position and is sparring with Mr Kurti over who should lead Kosovo’s talks with Belgrade and western allies; he has previously mooted a “border correction” as a possible part of a final deal with Serbia, while Mr Kurti says any exchange of territory would be disastrous.

Mr Kurti said the threat to his government and accusations of “anti-Americanism” showed that Kosovo’s cronyist political old guard was fighting to retain power and privilege.

“These are desperate calls,” he said. “Kosovo is probably the most pro-American country in the world ... The trans-Atlantic alliance is crucial for Kosovo and Albanians.”