Confusion surrounds US plans for future in Iraq 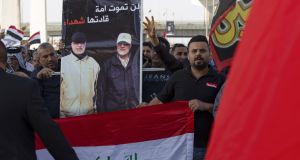 Iraqis carry a poster depicting Iran’s Gen Qasem Suleimani (right) and senior Iraqi military figure Abu Mahdi al-Muhandis as they march in a symbolic funeral procession in the city of Basra, in the wake of the US drone strike last week which killed both. Photograph: Hussein Faleh/AFP/Getty

The Pentagon insisted that the United States has no plans to pull out of Iraq, despite the emergence of a draft letter by a senior US military commander in Iraq indicating that a withdrawal was imminent.

“In deference to the sovereignty of the Republic of Iraq, and as requested by the Iraqi parliament and the prime minister,” the US will be “repositioning forces over the course of the coming days and weeks to prepare for onward movement,” the letter to the Ministry of Defense stated.

“There’s been no decision made to leave Iraq. Period,” defence secretary Mark Esper said in Washington shortly after the contents of the letter were reported yesterday.

The chairman of the joint chiefs of staff Mark Milley said the letter was a “draft, it was a mistake . . . it should not have been released.”

The confusion surrounding the next steps for the US in the Middle East comes at a time of heightened tension in the region following the killing of Iranian commander Qassem Suleimani by a US drone at Baghdad Airport last week.

The operation has put intense pressure on the US-Iraq relationship, almost 17 years after the US entered the country in the 2003 invasion.

US president Donald Trump warned Iraq that it could face “very big sanctions” if it forced US troops to leave the country, also warning that Iraq would have to compensate the US for money spent on an airbase there. “We’re not leaving unless they pay us back for it,” he said.

Crowds of mourners dressed in black gathered in Iran on Monday following the repatriation of Suleimani’s body, a towering figure in Iran. Tehran has promised revenge for the killing.

Iranian foreign minister Javad Zarif said the US actions had unleashed “global anti-US fury and a worldwide rancour”, claiming that the “end of malign US presence in West Asia has begun”.