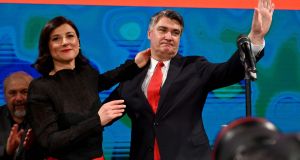 Mr Milanovic secured 52.7 per cent of votes in Sunday’s presidential run-off to oust right-wing incumbent Kolinda Grabar-Kitarovic, who took 47.3 per cent. Ms Grabar-Kitarovic led a gaffe-prone campaign that highlighted divisions in the ruling Croatian Democratic Union (HDZ), which backed her bid for re-election.

Her defeat – coming after a weaker than expected performance by the HDZ in last year’s European elections – ramps up pressure on Mr Plenkovic before a party leadership vote this year. It could fuel tension between the government and Croatia’s new head of state during a six-month EU presidency that began last week.

“There will be hard cohabitation in accordance with the constitution and law. We have a long history of relations... so let’s see and talk further,” Mr Plenkovic said of Mr Milanovic, a social democrat who served as prime minister from 2011-16.

“We will do everything we can so that the HDZ wins again in the parliamentary election,” he added.

Mr Milanovic insisted he would not favour the Social Democrats, even as they fight to regain power this year.

“For me, each party on the formal level will be the same. I will co-operate with whoever has executive power. I will not make divisions among Croatian citizens,” he told supporters on Sunday night.

“There will be no plotting, no secret deals. I will treat all political parties equally, because we are a multi-party parliamentary democracy... Any other way would lead to autocracy, tyranny, arbitrariness, plunder, and the president of the republic must be an obstacle to that,” he added.

“If this narrow but fair and clear victory of mine gives some faith and some spirit to our society and to our people, I am a happy man and let us rejoice together.”

Mr Milanovic (53) won last month’s first round of elections, but in the run-off Ms Grabar-Kitarovic had hoped to secure votes from supporters of nationalist singer and businessman Miroslav Skoro, whom she narrowly beat to second place.

That surge failed to materialise, however, and her popularity in the provinces and among Croats abroad failed to outweigh Mr Milanovic’s dominant showing in Croatia’s biggest cities.

Ms Grabar-Kitarovic (51) recently sang at a birthday party for scandal-plagued Zagreb mayor Milan Bandic and offered to bring him cakes if he was jailed for graft. She also accepted an endorsement from Julienne Busic, who was jailed with her husband for hijacking a US passenger plane in 1976 to highlight Croatian calls for independence from Yugoslavia.

The failure of her populist and nationalist campaign is expected to intensify HDZ debate over whether to move further right or towards the political centre.

“We will conduct analyses not to find a culprit, but the reasons (for defeat),” deputy prime minister Davor Bozinovic said on Monday.

“The aim... is to come out stronger from all this, so that what proved to be a mistake in this campaign is not repeated in the parliamentary elections.”