Rush to finish Istanbul airport leads to deaths and protests 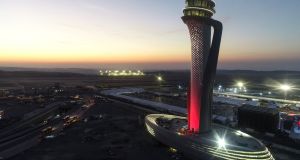 The air traffic control tower of Istanbul New Airport during sunset. The airport is the latest and largest in a series of so-called megaprojects built by the AK Party. Photograph: Muhammed Enes Yildirim/Anadolu Agency/Getty Images

It has been billed as the biggest airport ever built. The Istanbul New Airport, 35km (22 miles) north of Turkey’s most populous city, will handle up to 90 million passengers when it opens later this month, and a further 60 million when fully finished a decade from now.

In the frenetic rush to open on October 29th, the day Turkey celebrates Republic Day, the airport build has also come with mammoth problems: the deaths of dozens of workers, strikes and protests.

On September 16th, 24 people were arrested for protesting against poor conditions for workers and last month hundreds walked off the job. Since then, many have been ordered to work under police watch and more than 400 have been detained for demonstrating and “damaging public property”.

The unrest was prompted by a collision of two buses carrying workers across the site, injuring 17 people and fuelling a strike on the morning of September 14th. That night, riot police used tear gas to detain hundreds of workers at their dormitories.

Problems for workers have been building for months. According to interviews with a truck driver published by the independent Cumhuriyet newspaper in February, as many as 400 workers have died in workplace accidents such as vehicle collisions and falls over four years.

Passage points are blocked because of the working sites

The newspaper claims families of dead workers have been paid hush money. One worker, Orhan Bingol, died on site having received no safety training, according to leftist newspaper Sol. “Although there are ambulances waiting all around the site, the passage points are blocked because of the working sites,” an unidentified worker told the newspaper.

Safety measures, according to Turkish media, are negligible. The press coverage prompted a statement from government officials. The labour ministry admitted in February that 27 workers had died in accidents at the airport since 2015. More than 30,000 are believed to be employed on the site.

As well as fatalities, workers have been forced to contend with bed bugs, overcrowded sleeping quarters and substandard food. Pressure on engineers and labourers to meet deadlines is said to be severe; workplace security officials resigned last month in protest at the dearth of safety measures.

“Because the construction site is a black box, it’s isolated from the world. There is no investigation. Even members of parliament are not allowed to enter,” says Özgür Karabulut, president of Disk, one of Turkey’s largest trade unions, and who was dismissed from working at the airport.

They are pushing workers to work harder for longer hours

“The IGA construction site is a slave camp. This is the 21st century but we are working there like slaves from the 19th century. \[The construction partners] have a plan to finish by October 29th. It’s not easy. That’s why they are pushing workers to work harder for longer hours,” he says.

Employees quoted by Deutsch Welle said that tanks were brought to the site and that union representatives seeking access to workers’ working and living quarters were refused entry. Workers have drawn up a list of 15 demands including better shuttle bus services and wages being paid on time.

Of the allegations made in the Cumhuriyet newspaper, a spokesperson for IGA, the consortium building and operating the airport, said: “The figures (for the alleged number of work-related fatalities) are incorrect. We are responsible to inform all relevant institutions on the matter. It is impossible to hide such incidents or fail to report them legally.

State media has portrayed workers’ facilities as being favourable, with fitness centres and other amenities available on-site. President Erdogan, whose plane was the first to land at the airport last June, hasn’t commented directly on the protests but insists the opening will go ahead as planned.

Dissent, however, has been voiced by government officials. “The Justice and Development Party (AK Party) governments have solved several of the country’s social policy problems in the last 16 years, but the problem of occupational safety is not yet one of them,” wrote Bunyamin Esen, an inspector at Turkey’s Social Security Institution in the pro-government Daily Sabah newspaper last year.

It will also serve as the new hub for Turkish Airlines

The 80-million-square-metre airport is the latest and largest in a series of so-called megaprojects built by the AK Party during its 15 years in power. It will allow up to 114 planes to dock simultaneously, contain a 42km-long baggage handling system and offer flights to more than 300 destinations. It will also serve as the new hub for Turkish Airlines, replacing Ataturk Airport, which has been at full capacity for years.

Turkey has one of the worst records for workplace accidents in the world. According to the Workers’ Health and Work Safety Assembly, an Istanbul-based watchdog, more than 2,000 people died in accidents at work last year, almost one-third in the construction industry.