Kavanaugh inquiry must be comprehensive but quick – Trump 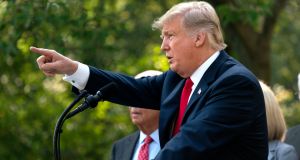 US president Donald Trump in the Rose Garden of the White House. Photograph: Jim Lo Scalzo/EPA

US president Donald Trump has said he wants a “comprehensive” FBI investigation into supreme court nominee Brett Kavanaugh, but stressed that it should be completed quickly.

As controversy continued over the scope and parameters of the FBI investigation into Mr Kavanaugh, which was announced by the White House late on Friday, Mr Trump said the FBI “should do what they have to do to get to the answer”.

But he said he wanted a result “quickly” as the situation was not fair to Mr Kavanaugh. “It is unfair to the family and to the judge. It is so unfair to his kids and his wife,” he said.

Mr Trump was responding to questions about Mr Kavanaugh’s nomination at a press conference in the White House Rose Garden, where he was announcing details of a new trade deal between the United States, Mexico and Canada.

Asked if Mr Kavanaugh should be interviewed by the FBI for the investigation, he replied: “I think so. I think it’s fine if they do. That’s up to them.”

Mr Kavanaugh’s nomination to the supreme court has been delayed following a series of allegations against him by women. Christine Blasey Ford, a California-based university professor, claims he sexually assaulted her in 1982 when they were both high-school students.

After she came forward another woman, Deborah Ramirez, who attended university with Mr Kavanaugh, claimed he thrust his exposed genitals in her face at a drunken party when they were in college. A third accuser, Julie Swetnick, said she observed Mr Kavanaugh at parties where women were verbally abused, inappropriately touched and “gang-raped”.

Mr Trump said on Monday he believed Ms Swetnick had “very little credibility”, though he didn’t rule out the FBI interviewing her. “If there is any credibility, interview the third one. But I want it to be done quickly because it’s unfair to the family and to the judge.”

His comments came as Democrats criticised the terms of the investigation which was announced after Republicans came under enormous pressure to reexamine their support for Mr Kavanaugh’s supreme court nomination.

The decision to open an investigation followed an acrimonious day on Capitol Hill last Thursday when Dr Blasey Ford recounted her memory of the alleged sexual assault by Mr Kavanaugh to the Senate judiciary committee. Mr Kavanaugh vigorously denied the accusation, and any allegation of sexual misconduct, in subsequent testimony to the judiciary.

Republican senator Jeff Flake, who demanded the week-long FBI investigation into the allegations against Mr Kavanaugh as a condition of his support for the candidate, indicated on Monday that he would not endorse the nominee if he was not satisfied that the process was fair and open.

Amid reports that the FBI has already completed interviews with four of the individuals it contacted in connection with the sexual misconduct allegations, including Ms Ramirez, Senate Democrats released a list of 24 people that they said should be interviewed as part of the FBI investigation.

Meanwhile, a former classmate of Mr Kavanaugh at Yale accused the judge of lying under oath about his drinking. Charles Ludington, a professor at North Carolina State University, said he was deeply troubled about Mr Kavanaugh’s testimony.

“In denying the possibility that he ever blacked out from drinking and in downplaying the degree and frequency of his drinking, Brett has not told the truth,” he said, adding that while he did not feel heavy drinking or loutish behaviour should “condemn a person for the rest of his life ... it is truth that is at stake”.