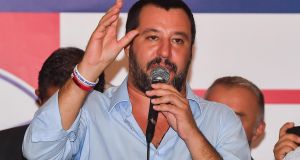 A trial of strength between Italy’s new populist Eurosceptic coalition government and the EU was never going to be long in coming. And sure enough, its first draft budget has set off a war of words between Rome and Brussels.

It’s as much about politics as economics, reflecting the new government’s impatience with the very idea of shared EU budgetary surveillance in the euro zone, not least as it tries to implement costly electoral pledges.

These include the €10 billion that has been being earmarked to fund a “citizenship income”, or guaranteed minimum income. This was the biggest promise made by the Five Star Movement, which governs in coalition with the far-right League.

On Tuesday League leader and deputy prime minister Matteo Salvini said he was ready to sue the European Commission for scaring the markets with its criticism of Italy’s proposed expansionary budget. He claimed the “words and threats” of commission president Jean-Claude Juncker “and other high EU bureaucrats” were damaging the Italian economy, adding: “We are ready to seek damages from those who want to harm Italy. ”

Public expenditure can make you popular in the short term ... but in the end you have to be honest about who pays

Markets have been implementing higher interest rates, not in response to Juncker but to concerns about the Italian government’s announcement last week that it intends to renege on its predecessor’s commitment to bring down its fiscal deficit to 0.8 per cent of gross domestic product by next year and gradually to turn it into a surplus in the two years after that.

The new fiscal deficit target is three times that level – 2.4 per cent – to be sustained for three years.

EU ministers and commissioners have been wondering aloud how Italy can possibly reduce its public debt – 132 per cent of gross domestic product, the second-highest in the euro zone – and warn that it cannot evade its responsibilities under the EU’s Growth and Stability Pact.

That requires euro-zone governments to bring their structural budget balance, which excludes one-offs and the effects of business cycles, to balance or surplus.

Rome must submit its draft budget proposal to the European Commission for review by the middle of October.

At the meeting of finance ministers in Luxembourg on Monday, economic affairs commissioner Pierre Moscovici, who will preside over the assessments of national budgets, warned the Italians bluntly that member states would expect him to enforce the rules.

Refusing to be drawn on the detail of the Italian proposals, which he said he had yet to see, he added pointedly that “public expenditure can make you popular in the short term ... but in the end you have to be honest about who pays. It’s always the citizens who pay.”

Salvini responded by saying the interest of the Italian people came ahead of “bureaucrats”.

Italy’s technocrat finance minister, Giovanni Tria, seen by EU partners as a moderating force on the two coalition allies, advised colleagues and media to “stay calm”, insisting the debt-to-GDP ratio would fall. Tria argued that Italy would still be able to reduce debt by 1 per cent of gross domestic product over the next three years – because of projected higher growth. His growth optimism is not shared by partners.

And the expansionary budget is seen as an internal victory for Salvini and a defeat for Tria, who was also forced to deny reports he has threatened to resign over it.

Salvini is only too aware that the confrontation that is certainly looming will place the EU leaders in a very difficult position politically. In the European elections next May, it will be easy for populists in Italy and elsewhere to portray the EU once again as bullying and attempting to thwart the “democratic mandate” of Rome’s government.

Shades again of Greece and the “austerity EU” of the recent past. But a failure to enforce the pact’s obligations on members may do as much harm to the credibility of the euro as any public backlash.