Billionaire under pressure from Sanders and Warren over treatment of women

Elizabeth Warren has attacked fellow US Democratic presidential hopeful Mike Bloomberg over his controversial "stop and frisk" policy during his time as mayor of New York. Video: MSNBC 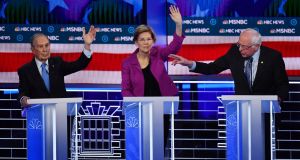 Mr Bloomberg, who was a late entrant to the race, was attacked on a range of issues, reflecting growing unease by the other candidates at his recent surge in national polls.

Within seconds of the debate opening, Bernie Sanders, who remains the front-runner in the race, took aim at Mr Bloomberg, highlighting the “stop-and-frisk” policy he adopted while mayor of New York which disproportionately impacted young African-American men.

Asked to respond, Mr Bloomberg replied by arguing that Sanders was going to tell 160 million people that he would “take away the insurance plans that they love.”

But within minutes Massachusetts Senator Elizabeth Warren took on Mr Bloomberg. “I’d like to talk about who we are running against. A billionaire who calls women fat broads and horse-faced lesbians. And no, I’m not talking about Donald Trump, ” she said, as Mr Bloomberg stood stony-faced beside her. “I’m talking about Mayor Bloomberg. Democrats are not going to win if they have a nominee who has a history of hiding his tax returns, of harassing women.”

She added: “Democrats take a huge risk if we just substitute one arrogant billionaire for another.”

This is not just a question of Mike Bloomberg’s character—it’s a question about electability. We’re not going to beat Donald Trump with a man who silences women with who knows how many nondisclosure agreements. #DemDebate pic.twitter.com/ozPFghxU8s

The best-known socialist in the country happens to be a millionaire with three houses. #DemDebate pic.twitter.com/0tbbWLtBxg

Ms Warren also landed perhaps one of the most damaging blows on Mr Bloomberg later in the debate, when the businessman was asked about his track record on women in the work place.

In a back-and-forth with Ms Warren, Mr Bloomberg refused to answer how many women had signed non-disclosure agreements with his company, and said he would not cancel any previously-signed agreements. “We’re not going to end these agreements because they were made consensually,” he said.

He also said that none of the women had accused him of doing anything wrong, “except maybe they didn’t like the joke I told.”

Former vice-president Joe Biden, who put in a better performance than in previous debates, also piled-in on Mr Bloomberg over his record with women. “All the mayor has to do is say ‘you are released from the nondisclosure agreements,’” he said.

Wednesday’s debate – which took place days before the Nevada caucuses – was the most fiery to date, with Mr Bloomberg’s presence injecting a new dynamic into proceedings. Eight candidates now remain in the Democratic race for president, with six qualifying for Wednesday’s debate, including Mr Bloomberg for the first time. Democrats will choose their candidate at the Democratic National Convention in Milwaukee in July.

Ms Warren, who is fighting hard to keep her campaign on track following disappointing performances in Iowa and New Hampshire, put in a combative and commanding performance. “Amy, I looked online at your plan, it’s two paragraphs,” she said to fellow senator Amy Klobuchar about her healthcare plan, prompting a furious glance from Ms Klobuchar. Ms Klobuchar clashed with Pete Buttigieg, the former South Bend mayor who also hails from a midwestern state several times, questioning his experience. “I wish everyone was as perfect as you, Pete,” she said, in a dispute over her record on immigration issues. “You have not been in the arena, you’ve memorised talking points.”

Mr Sanders’ position at the top of the national polls looks assured following Wednesday’s debate. The Vermont senator reiterated many of his key policy platforms, including the need for universal healthcare and for workers to be appointed to corporate boards. He appeared to bat off previous commitments to release health records given his recent heart attack, noting that Mr Bloomberg also had two stents inserted.

He hit out at Mr Bloomberg’s personal wealth, which is estimated at $62 billion (€57 billion), calling it “wrong and immoral.” Mr Bloomberg defended his decision not to have yet published his tax returns, promising to do so in the coming weeks. “The number of pages will probably be in the thousands of pages,” he said. “I can’t go to Turbo Tax,” he added, a reference to a software programme used by American taxpayers.

Wednesday night’s debate took place hours after a Washington Post-ABC poll put Mr Sanders well ahead in terms of the national picture, with 32 per cent of Democrats and Democratic-leaning independents favouring the socialist senator, an 8-point increase from last month. Mr Biden’s support dropped 11 points to 17 per cent, with Mr Bloomberg climbing six points since January to 14 per cent.

The race to select a Democratic nominee is entering a crucial phase, with the Nevada caucuses taking place on Saturday, followed by the South Carolina primary a week later. More than a dozen states will choose their nominee on Super Tuesday on March 3rd.

US president Donald Trump touched down in Las Vegas shortly after the debate concluded. He is scheduled to hold a campaign rally in the city on Friday, on the eve of the Democratic caucuses.