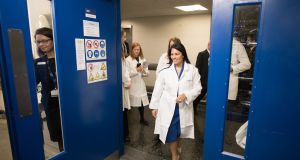 What has the British government announced?

The UK wants to overhaul the country’s immigration rules by moving to a “points-based system” where migrants will improve their chances of securing a visa to work in the UK if they have a job offer from an employer at a particular skill level and if they speak English.

What will this mean for EU citizens?

It means that from the start of next year, if the proposals become law, EU migrants seeking to work in the UK will be treated the same as people from the rest of the world and will require visas.

Will Irish people be affected as EU citizens?

What will it mean for workers in Northern Ireland who are neither British or Irish?

From the start of next year, EU and non-EU citizens who are not Irish nationals will have to apply for a working visa.

Will this cause problems in Northern Ireland?

Politicians and representatives from the business, retail and hospitality sectors in the North said the newly announced immigration rules could cause staff shortages in Northern Ireland. Many EU citizens who are neither British or Irish and non-EU citizens currently work in the North in sectors such as hospitality, agrifood, manufacturing and healthcare.

Could this new system cause problems at the Border?

It could. Many non-Irish EU citizens work south of the Border in counties such as Cavan and Monaghan. UK immigration officials would be required to check that non-Irish EU citizens are not moving across to work in businesses in Northern Ireland. This could create issues for the free movement of people guaranteed to Irish and British people under the Common Travel Area.

What about eastern Europeans such as Polish workers who have lived in Ireland for years and travel back and forth to the UK for work?

Unless they are dual Irish citizens, they will have to apply for a visa if they want to work in Northern Ireland or Britain. This could result in a dramatic reduction in the large number of low-skilled workers who have moved between Ireland and Britain since 2004 when nine eastern European countries joined the EU and earned the right to work in the UK.

How exactly will the system work?

Under the proposals, if an overseas applicant from anywhere in the world has a job offer from an “approved employer” at an “appropriate skill level” and they speak English, they will receive 50 points. But they require 70 points to secure a visa, so they need to meet other criteria. If they earn at least £25,600 (€30,627) – down from the £30,000 currently applied to non-EU applicants – they will receive the required 20 additional points. Applicants will receive 10 points if they have a PhD but 20 points for a PhD in the areas of science, technology, engineering or maths. They will receive 20 points if they have an offer of a job in a sector where the UK has shortages of staff.

Why is the UK introducing this?

Part of the reason why the UK wanted out of the EU was to end free movement of people that brought skilled and non-skilled workers to the UK from eastern Europe and other parts of the EU. The UK government has said it wants to “move away” from depending on “cheap labour” from Europe. UK home secretary Priti Patel said that the government wanted to “encourage people with the right talent” and “reduce the levels of people coming to the UK with low skills”.