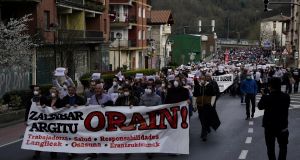 Protesters wear masks to protect themselves from the contaminated air of a burning landfill, in Ermua, on Saturday, after it collapsed on February 6th. Photograph: Vincent West/Reuters 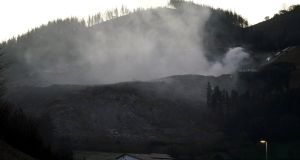 Smoke rises from the landfill site in Zaldibar on Saturday. Photograph: Vincent West/Reuters

Nearly two weeks after a landfill site collapsed in the Basque Country, two men are still missing and local people fear that the accident has triggered a health hazard.

On February 6th, thousands of tonnes of industrial waste slid off a landfill site on a hill near the town of Zaldibar, much of it on to a nearby main road. Two employees of the company that manages the landfill were buried by the waste and fears about environmental risks increased after a fire broke out on the site.

With the fire now extinguished, the hunt for the two missing men continues. Rescue workers have been combing the area where the collapse happened with sniffer dogs under the supervision of geologists and topographers to ensure there are no further landslides.

Many local people, worried about the quality of air and water due to chemicals released by the accident, have been wearing face masks for protection. The Basque government has recommended that people in Zaldibar and the nearby towns of Ermua and Eibar – which have a total population of about 50,000 – should keep their windows closed and avoid doing exercise outside. It said pregnant women and children in particular should follow this advice.

A first division football game between Eibar and Real Sociedad was suspended on Sunday and many events that had been organised this week to celebrate Carnival in the area have been cancelled.

A study carried out on February 10th showed there were about 40 times the normal amount of toxins in the air. A report by the Basque water authority identified an increase in levels of ammonia and other industrial substances in water supplies. However, in both cases, experts have insisted that the levels of chemicals in circulation should not cause alarm. A new air quality test is due to be carried out on Thursday.

Meanwhile, a judge is investigating the landfill company, Verter Recycling 2002, to see if it breached environmental and labour regulations.

The Basque environment minister, Iñaki Arriola, has said that the firm should take full responsibility for the stability of the site. He said that last summer the landfill had undergone an exhaustive inspection which had revealed 23 “abnormalities”, none of which suggested a landslide was imminent.

The government’s handling of the incident has also come under scrutiny, with the opposition accusing it of being “overwhelmed” by events.

On Tuesday, the Basque president, Íñigo Urkullu, apologised. “I have no problem in accepting criticism,” he said. “I am very sorry for the mistakes we may have committed in responding to an unprecedented situation of enormous complexity.”