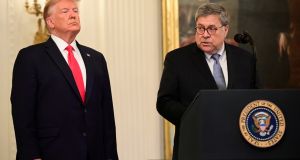 Tensions between Donald Trump and the US Department of Justice increased on Wednesday as the president issued a flurry of critical tweets about the justice system, potentially undermining his relationship with attorney general William Barr.

In a series of retweets, the president posted a conservative activist’s call for Mr Barr to “clean house” at the justice department and claim that the president was the “victim of a seditious conspiracy”.

He also tweeted multiple reports calling for an investigation into the FBI-sanctioned inquiry into his election campaign’s dealings with Russia, which ultimately led to the appointment of special counsel Robert Mueller.

Mr Trump’s combative tweets come a day after reports that Mr Barr is considering resigning, due to growing frustration with the president’s interference in the criminal justice and judicial system.

Mr Barr told the ABC network in an interview last week that Mr Trump’s tweets were preventing him from doing his job. “I cannot do my job here at the department with a constant background commentary that undercuts me,” he said, in a rare rebuke of the president by a cabinet member.

Mr Barr’s comments came amid outrage over the sentencing of Roger Stone, a Trump ally who was indicted on obstruction of congress and campaign finance charges last year.

It emerged that the Department of Justice asked for a more lenient sentence than the prison term of up to nine years it originally requested – prompting four department officials to resign from the case. Mr Trump had tweeted about Mr Stone’s “horrible”, “unfair” and “disgraceful” treatment by the judicial system, leading to accusations that the president was influencing criminal justice decision-making.

Mr Trump also hit out at the presiding judge in Mr Stone’s case, Amy Berman Jackson, accusing her of bias.

The Federal Judges Association convened a special conference call with its executive committee on Wednesday on the back of Mr Trump’s comments.

Despite the controversy over Mr Stone’s case, Ms Berman Jackson has indicated that his sentencing will go ahead on Thursday in Washington.

He also commuted the sentences of eight others.

The president said he had made the decision on the advice of several friends and acquaintances including his personal lawyer Rudy Giuliani, media tycoon Rupert Murdoch and prominent conservative donor Sheldon Adelson.

Explaining his decision to reporters, Mr Trump said he had the authority as president to grant clemency. Most previous presidents have exercised this right in the final weeks of their terms.

“I’m allowed to be totally involved,” he told reporters. “I’m actually, I guess, the chief law enforcement officer of the country. But I’ve chosen not to be involved.”

Asked if he intended to pardon Mr Stone, former campaign manager Paul Manafort and his former national security adviser Michael Flynn, Mr Trump told reporters that he had not yet given that any thought but said they had been treated “very unfairly”. Mr Manafort is serving a 7½-year prison term for tax and bank fraud, and Mr Flynn is awaiting sentence after pleading guilty to lying to the FBI.

The clemency for a string of high-profile men from the finance and sports worlds was strongly criticised by the Democratic frontrunner for the presidency, Bernie Sanders, who tweeted: “Today, Trump granted clemency to tax cheats, Wall Street crooks, billionaires, and corrupt government officials. Meanwhile thousands of poor and working-class kids sit in jail for nonviolent drug convictions. This is what a broken and racist criminal justice system looks like.”

Mr Sanders was due to take part in a debate with rivals for the Democratic Party’s nomination for president on Wednesday night in Las Vegas.