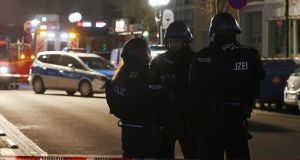 Police officers secure the area after a shooting in Hanau near Frankfurt, Germany. Photograph: Kai Pfaffenbach/Reuters

Eight people were killed on Wednesday in two shooting incidents in the western German city of Hanau, police said.

Police special units are chasing the perpetrators who fled the scene of the first attack in a dark-coloured car, police added.

Hanau is near Frankfurt in the western state of Hesse.

Regional public broadcaster Hessischer Rundfunk reported, without citing sources, that an attack took place in a shisha bar in the centre of the town.

It said witnesses reported hearing eight or nine shots and seeing at least one person lying on the ground.

The perpetrator or perpetrators then apparently went to another part of the town, where shots were fired in another shisha bar, the broadcaster said. – AP/Reuters