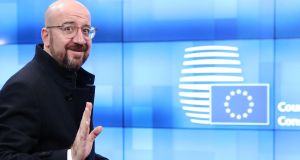 President of the European Council Charles Michel: he is charged with brokering a deal among the 27 member states. Photograph: Francois Walschaerts/AFP via Getty Images

When Taoiseach Leo Varadkar hops on a plane on Thursday afternoon to attend a Brussels summit he will be flying from one intractable problem – government formation – into another which is perhaps even more difficult to resolve: the EU 2021-2027 budget talks deadlock.

It has, if anything, more unpredictable moving parts, reflecting a chasm between those who pay in and those who are net beneficiaries. The negotiations have in the past been compared to three-dimensional chess.

The leaders have been told to bring several shirts for the meeting, which is scheduled for a day, but expected to run for three or even four.

Expectations of an agreement are low, with another summit soon already being discussed.

The European Commission warns that failure to agree within the next couple of months will see spending authorisations run out on January 1st, and a drying up immediately of new EU programmes.

The latest compromise proposal – “negotiating box” – from European Council president Charles Michel, who is charged with brokering a deal among the 27 member states, is for a spend of €1.094 trillion for the 2021-2027 period, representing an average increase in national contributions of 37 per cent over the seven years.

For net contributors, such as Ireland, the increase is likely to be significantly larger, although the commission insists that 80 per cent of any increase is attributable to growth, inflation and Brexit. The latter leaves a €75 billion hole in the EU budget.

Varadkar has already warned the Dáil that Ireland will have to reconcile itself to “significant growth in our contributions as part of the next [budget] as a result of continued economic growth, increased expenditure and the departure of the UK”.

The central argument leaders face concerns the overall scale of the budget (the multiannual financial framework or MFF) for the next seven years as a share of the EU’s gross national income (GNI).

At the conservative end of the spectrum of ambition are the big net contributor states of Germany, Sweden, Netherlands and Denmark, known as the “frugal four”, who insist on maintaining the current ceiling of 1 per cent of EU GNI.

Although tiny compared to the 47 per cent of GNI member states spend on average domestically, every hundredth of a percentage point (roughly €10bn) is bitterly contested. The commission estimates the cost of the Michel budget at €280 per EU citizen per year.

At the other end of the scale are MEPs – “always ready to spend other people’s money”, one diplomat says sourly – who want a spending ceiling of 1.3 per cent of GNI.

The commission’s opening bid to cover agreed priorities is 1.14 . A proposal by the Finnish presidency before Christmas and a new compromise proposed by Michel splits the difference at 1.07.

“At the moment we [the European Parliament and Michel] remain €230 billion apart,” says David Sassoli, president of the parliament, which is the ultimate budget authority. The gap between the “frugal four” and the parliament is €300 billion. Michel and the commission are €40 billion apart.

Irish receipts from direct EU support were at €2 billion in 2019 – 80 per cent of this from the Common Agricultural Policy (Cap) , the rest mainly under regional funding and research headings.

This is a controversial figure and a serious underestimation, according to the commission, which points to Ireland receiving a net benefit of €30 billion a year from its ability to trade freely across the single market.

A senior EU official points out that by one measure Ireland is indeed a net contributor, by another a net beneficiary.

The central challenge for Michel this weekend is reconciling the EU’s ambition to embrace new priorities, including a massive expansion on spending to combat climate change which is earmarked for 25 per cent of the new spend.

Other new priorities include accommodating migrants, expanding common defence spending and riding the digital revolution, while traditional programmes such as Cap and structural funding, including cohesion funding, would be addressed at helping poorer states to catch up.

New priorities are set to take up some 35 per cent of the budget, while the other two strands shrink below 30 per cent.

Michel’s bilateral talks are said to have focused with the “cohesion” countries on undoing some of the squeeze on their aspirations to hold on to current levels of structural funding. He has done so by shifting some €6 billion of the proposed €323 billion of cohesion policy funds from the wealthier states to the poorer ones.

In agriculture (€329bn), of particular concern to Ireland, he has reversed suggested cuts in direct payments by cutting rural development funding. But to sweeten the pill he is suggesting that member states should be freer to switch their funding from one pillar to another and would reduce the national co-payments they must come up with.

Diplomatic sources suggest that he may have gone a considerable distance to provide the “cohesion” group of countries with the “wins” they need to sell a deal.

Part of Michel’s wooing of the “frugal four”, who also have to demonstrate “wins” to their electorates, has been to promise that the controversial budget rebates they receive will be maintained as lump sum payments at a level yet to be negotiated. The rebates, largely the fruit of a mechanism devised for the British in their constant battles over the budget, would have been gradually dismantled by the commission. As a sweetener, however, for the net contributors, the Michel concession is unlikely to prove enough.

Michel has also sought to placate Poland and Hungary who fear that a new “rule of law” mechanism to claw back cash from states abusing EU funds will be used to interfere in what they regard as domestic prerogatives. Michel has made the new scheme more difficult to trigger – instead of requiring an enhanced (qualified) majority to block measures, a qualified majority would be required to initiate the process.

States such as Germany, which is determined to see enhanced accountability for EU funds, will be unhappy at what they see as a dangerous dilution of an important new principle.

To help ease the burden on member states’ budgets the Michel proposed budget also includes provision for two new EU-wide forms of tax – a tax on non-recycled plastics, and a levy on profits from emissions trading schemes in the member states.