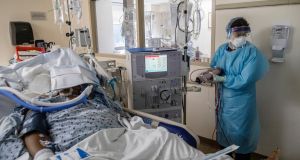 For weeks, US government officials and hospital executives have warned of a looming shortage of ventilators as the coronavirus pandemic descended. But now doctors are sounding an alarm about an unexpected and perhaps overlooked crisis: a surge in Covid-19 patients with kidney failure that is leading to shortages of machines, supplies and staff required for emergency dialysis.

In recent weeks, doctors on the front lines in intensive care units in New York and other hard-hit cities have learned that the coronavirus isn’t only a respiratory disease that has led to a crushing demand for ventilators. The disease is also shutting down some patients’ kidneys, posing yet another series of life-or-death calculations for doctors who must ferry a limited supply of specialized dialysis machines from one patient in kidney failure to the next, all the while fearing they may not be able to hook up everyone in time to save them.

It is not yet known whether the kidneys are a major target of the virus or whether they’re just one more organ falling victim as a patient’s ravaged body surrenders.

Dialysis fills the vital roles the kidneys play, cleaning the blood of toxins, balancing essential components including electrolytes, keeping blood pressure in check and removing excess fluids. It can be a temporary measure while the kidneys recover, or it can be used long-term if they do not. Another unknown is whether the kidney damage caused by the virus is permanent.

“The nephrologists in New York City are going slightly crazy making sure that everyone with kidney failure gets treatment,” said Dr David Goldfarb, chief of nephrology at the New York campus of the New York Harbor VA Health Care System. “We don’t want people to die of inadequate dialysis.

“Nothing like this has ever been seen in terms of the number of people needing kidney replacement therapy,” he said.

Outside of New York, the growing demand nationwide for kidney treatments is fraying the most advanced care units in hospitals in emerging hot spots like Boston, Chicago, New Orleans and Detroit. Kidney specialists now estimate that 20 per cent to 40 per cent of ICU patients with the coronavirus suffered kidney failure and needed emergency dialysis, according to Dr Alan Kliger, a nephrologist at Yale University School of Medicine who is co-chairman of a Covid-19 response team for the American Society of Nephrology.

Hospitals’ “usual supplies are very quickly running out,” he said.

One doctor in New York City, who was not authorised to speak publicly, recalled anguished exchanges with other physicians last week. “You’re yelling at them. You’re telling them you don’t have a dialysis machine to give them. You hear the intensity and the desperation in the other person’s voice,” the doctor said. “My job was hell.”

As the coronavirus spread rapidly in New York and other cities, governors and mayors clamoured for thousands more ventilators. But doctors have been surprised by the scarcity of dialysis machines and supplies, especially specialised equipment for continuous dialysis. That treatment is often used to replace the work of injured kidneys in critically ill patients.

The shortages involved not only the machines but also fluids and other supplies needed for the dialysis regimen. Having enough trained nurses to provide the treatment has also been a bottleneck. Hospitals said they have called on the federal government to help prioritise equipment, supplies and personnel for the areas of the country that most need it, adding that manufacturers had not been fully responsive to the higher demand.

The fluids needed to run the dialysis machines are not on the Food and Drug Administration’s watch list of potential drug shortages, although the agency said it was closely monitoring the supply.

The Federal Emergency Management Agency described the shortage of supplies and equipment as “unprecedented” and said it was working with manufacturers and hospitals to identify additional supplies both in the United States and overseas.

“Everybody thought about this as a respiratory illness,” said Dr David Charytan, chief of nephrology at NYU Langone Medical Center. “I don’t think this has been on people’s radar screen.”

The supplies allocated by manufacturers are insufficient, Dr Charytan said, adding that the hospital switched to another type of machine when it couldn’t get additional equipment it had wanted. “It just doesn’t come anywhere close to meeting the need,” he said.

Early reports out of China suggested a low incidence of kidney damage from Covid-19, although there were some indications that the virus might directly affect the kidneys. As more data emerged from there and as the pandemic began to take hold in Italy, word began to filter out to the broader nephrology community that many of the most seriously ill patients, those on ventilators, would also require dialysis.

It is not yet known whether the organ injury results from the virus infecting kidney cells or is a secondary effect of critical illness or the increased tendency for blood clots to form in people with the disease.

The shortages in the United States highlight a lack of planning among state and federal officials to ensure that “hot spots like New York are given preferential access, given the sheer volumes,” Dr Murphy said.

Dr Murphy also said areas of the country that are planning for a possible surge in the demand for ventilators “also need to think about dialysis” and a national distribution system. Hospitals are now pleading with the major manufacturers to send more supplies.

As the coronavirus reached the United States, Baxter and NxStage, owned by Fresenius, placed limits on what hospitals could order to prevent hoarding. Dr Michael Ross, chief of the nephrology division at Montefiore Health System in New York, said he spoke on the phone last Sunday with leaders of a company that produces dialysis supplies, “expressing how critical a situation this was for our patients.” The call was about getting more machines, filters, premixed fluids and tubing for continuous dialysis, he said.

The shortage of dialysis supplies in New York City hospitals was first reported by Politico. The two main manufacturers of equipment and supplies for dialysis said orders were up fivefold and that they were ramping up manufacturing as well as sending equipment and nursing staff to the New York region. Baxter, which is based in Illinois, said it also saw an increase in demand from China and Europe and was flying in extra products from Europe this weekend.

“The demand spike was so fast and so high,” said Lauren Russ, a spokeswoman for Baxter. “We’re doing everything we possibly can.”

On Friday, Fresenius announced it was creating a national supply of machines that can be moved from place to place. “We are committed to supporting hospitals with continuous supply, particularly in markets most heavily impacted, so that patients can get the care they need,” said Bill Valle, chief executive of Fresenius Medical Care North America in Massachusetts, in a statement.

Governor Andrew Cuomo of New York was asked at his briefing Thursday about hospital reports indicating that dialysis machines were in short supply. Dr Howard Zucker, the state’s health commissioner, said, “There are not shortages across the board,” and Mr Cuomo said that hospitals in need of equipment would get it.

In a statement, José Almeida, Baxter’s chief executive, said that the company was trying to prioritise the delivery of products “where they are most needed: hospitals that are being overwhelmed by an influx of patients who are critically ill from Covid-19.”

At Columbia University Irving Medical Center, Dr Donald Landry, the chair of medicine, directly contacted Valle of Fresenius when other efforts failed and the situation grew desperate. While Dr Landry said he was appreciative that the company responded by sending more machines, supplies and dialysis nurses, he described the experience as a warning to better prepare. “New York City gave us a glimpse of when a system comes up right to the edge,” he said.

Dr Joshua Rosenberg, an attending physician in the intensive care unit at the Brooklyn Hospital Center, said Thursday that he was seeing acute kidney injury in a wide range of patients beyond those who were predisposed to kidney disease because they had high blood pressure or diabetes.

Miriam Figueroa, a dialysis nurse at the hospital, went from patient to patient Thursday, providing three-hour dialysis treatments in a Covid-19 intensive care unit set up in a former chemotherapy infusion unit. Some patients in the ICU had developed acute kidney injury. They were receiving emergency dialysis through a vein in the neck, including one hospital staff member. Ms Figueroa said that as the need for dialysis for critically ill patients increased, the dialysis service had coped by moving machines and supplies from outpatient clinics to the inpatient wards. “We have to pull machines to do bedside” dialysis, she said, “so there are less patients that can be done as an outpatient.”

More than a dozen of the hospital’s roughly 240 patients in its outpatient dialysis clinic have died of Covid-19, according to Dr Priyanka Singh, one of the attending nephrologists. People with chronic kidney disease may be particularly vulnerable.

Doctors are also employing alternative types of dialysis. Some New York hospitals, including NYU, Montefiore and Weill Cornell, that are in short supply of the more specialised dialysis machines - needed for what is known as continuous renal replacement therapy - have turned to peritoneal dialysis. It is typically used in patients with chronic kidney disease who want to treat themselves at home. The treatment is not always optimal in hospital patients, especially in those whose conditions are less stable, but “we are trying to give patients something,” Dr Charytan said.

One problem with peritoneal dialysis in the context of Covid-19 is that it requires putting a catheter in a patient’s abdomen. That makes it difficult to use in those with failing lungs who need proning, a technique in which patients are rolled onto their stomach to help them take in oxygen. Some hospitals, including Montefiore, are placing the catheter toward the patient’s side to help with the problem.

Some hospitals are also struggling to find enough nurses and technicians to provide dialysis, especially after some who were the most skilled at providing the therapy fell sick with the virus themselves. “We did lose nurses to illness,” Dr Murphy of Mount Sinai said. “We’re just getting some of those nurses back, but it’s been a challenge. We’ve exhausted every avenue that we have within the state with regards to being able to increase nursing.”

Doctors say they are wrestling with how to ensure that patients who require immediate care receive it while assessing whether others can wait. “Now we have to think harder about whether or not that patient truly needs it and can we manage them medically without dialysis another day so we can provide dialysis to someone who more urgently needs dialysis,” Dr Ross of Montefiore said. “Those are not decisions we like to make.”